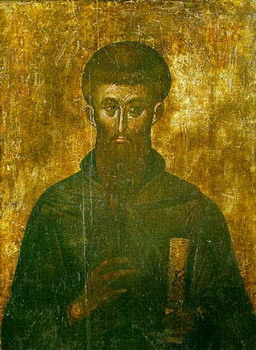 Saint Naum of Ochrid, a Bulgarian by descent, was one of the disciples of the holy Equals-to-the-Apostles Cyril and Methodios (May 11), and he accompanied St. Clement of Okhrid (July 27) when he preached the Gospel in Bulgaria. When St. Clement set off to the southwestern regions, St. Naum remained in the then capital city of Plisk. Afterwards St. Naum became succeeded St. Clement in a monastery on the shores of Lake Okhrida, where he labored for ten years. St. Naum reposed on December 23, 910, and his relics were glorified by numerous miracles, especially healings of spiritual infirmities. The memory of the saint is also celebrated on December 23.

If you like our project and you are satisfied with our work and effort, please consider making a donation that would help us to survive on the Internet and in further development of the project.
There are many other ways to help...