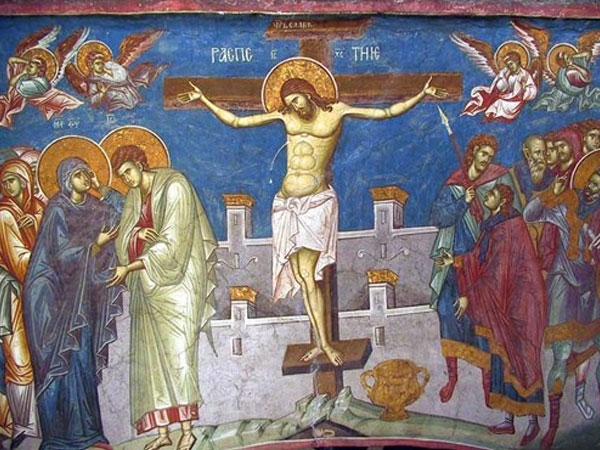 According to the New Testament, Jesus was arrested in the Garden of Gethsemane by the Temple Guards through the guidance of his disciple, Judas Iscariot. Judas received money for betraying Jesus. He told the guards that whomever he kisses is the one they are to arrest. Jesus was brought to the house of Annas, who is the father-in-law of the current high priest, Caiaphas. There he is interrogated with little result, and sent bound to Caiaphas the high priest, where the Sanhedron had assembled (John 18:1-24).

Conflicting testimony against Jesus is brought forth by many witnesses, to which Jesus answers nothing. Finally the high priest adjures Jesus to respond under solemn oath, saying "I adjure you, by the Living God, to tell us, are you the Anointed One, the Son of God?" Jesus testifies in the affirmative, "You have said it, and in time you will see the Son of Man seated at the right hand of the Almighty, coming on the clouds of Heaven." The high priest condemns Jesus for blasphemy, and the Sanhedron concurs with a sentence of death (Matthew 26:57-66). Peter also denies Jesus three times during the interrogations. Jesus already knew that Peter would deny him three times.

In the morning, the whole assembly brings Jesus to the Roman governor Pontius Pilate, under charges of subverting the nation, opposing taxes to Caesar, and making himself a king (Luke 23:1-2). Pilate authorizes the Jewish leaders to judge Jesus according to their own Law and execute sentencing, however the Jewish leaders reply that they are not allowed by the Romans to carry out a sentence of death (John 18:31).

Pilate questions Jesus, and tells the assembly that there is no basis for sentencing. Upon learning that Jesus is from Galilee, Pilate refers the case to the ruler of Galilee, King Herod, who was in Jerusalem for the Passover Feast. Herod questions Jesus but receives no answer; Herod sends Jesus back to Pilate. Pilate tells the assembly that neither he nor Herod have found guilt in Jesus; Pilate resolves to have Jesus whipped and released (Luke 23:3-16).

It was a custom during the feast of Passover for the Romans to release one prisoner as requested by the Jews. Pilate asks the crowd who they would like to be released. Under the guidance of the chief priests, the crowd asks for Barabbas, who had been imprisoned for committing murder during an insurrection. Pilate asks what they would have him do with Jesus, and they demand, "Crucify him" (Mark 15:6-14). Pilate's wife had seen Jesus in a dream earlier that day; she forewarns Pilate to "have nothing to do with this righteous man" (Matthew 27:19).

Pilate has Jesus flogged, then brings him out to the crowd to release him. The chief priests inform Pilate of a new charge, demanding Jesus be sentenced to death "because he claimed to be God's son." This possibility filled Pilate with fear, and he brought Jesus back inside the palace and demanded to know from where he came (John 19:1-9).

Coming before the crowd one last time, Pilate declares Jesus innocent, washing his own hands in water to show he has no part in this condemnation. Nevertheless, Pilate hands Jesus over to be crucified in order to forestall a riot (Matthew 27:24-26). The sentence written is "Jesus of Nazareth, King of the Jews." Jesus carries his cross to the site of execution (assisted by Simon of Cyrene), called the place of the Skull, or "Golgotha" in Hebrew and "Calvary" in Latin. There he is crucified along with two criminals (John 19:17-22).

Jesus agonizes on the cross for three hours, during which there is darkness over the whole land.[1] With a loud cry, Jesus gives up his spirit. There is an earthquake, tombs break open, and the curtain in the Temple is torn from top to bottom. The centurion on guard at the site of crucifixion declares, "Truly this was God's Son!" (Matthew 27:45-54)

Joseph of Arimathea, a member of the Sanhedrin and secret follower of Jesus, who had not consented to his condemnation, goes to Pilate to request the body of Jesus (Luke 23:50-52). Pilate asks confirmation from the centurion whether Jesus is dead (Mark 15:44). A soldier pierced the side of Jesus with a lance causing blood and water to flow out (John 19:34), and the centurian informs Pilate that Jesus is dead (Mark 15:45).
Joseph of Arimathea takes the body of Jesus, wraps it in a clean linen shroud, and places it in his own new tomb that had been carved in the rock (Matthew 27:59-60) in a garden near the site of crucifixion. Another secret follower of Jesus and member of the Sanhedrin named Nicodemus (John 3:1) also came bringing 75 pounds of myrrh and aloes, and places them in the linen with the body of Jesus, according to Jewish burial customs (John 19:39-40). They rolled a large rock over the entrance of the tomb (Matthew 27:60). Then they returned home and rested, because at sunset began the Sabbath (Luke 23:54-56).

On the third day, Sunday, which is now known as Easter Sunday, Jesus rose from the dead.

Because of the penitence and sorrow associated with the Crucifixion, the Divine Liturgy is never celebrated on Good Friday, which Eastern Orthodox call "Holy and Great Friday", except when this day coincides with the feast of the Annunciation (which falls on the fixed date of March 25).

The faithful revisit the events of the day through public reading of the Psalms and Gospels, and singing hymns about Christ's death. Rich visual imagery and symbolism as well as stirring hymnody are remarkable elements of these observances. In the Orthodox understanding, the events of Holy Week are not simply an annual commemoration of past events, but the faithful actually participate in the death and resurrection of Jesus.

Each hour of this day is the new suffering and the new effort of the expiatory suffering of the Savior. And the echo of this suffering is already heard in every word of our worship service - unique and incomparable both in the power of tenderness and feeling and in the depth of the boundless compassion for the suffering of the Savior. The Holy Church opens before the eyes of believers a full picture of the redeeming suffering of the Lord beginning with the bloody sweat in the Garden of Gethsemane up to the crucifixion on Golgotha. Taking us back through the past centuries in thought, the Holy Church brings us to the foot of the cross of Christ erected on Golgotha, and makes us present among the quivering spectators of all the torture of the Savior.

Holy and Great Friday is observed as a strict fast, and adult Byzantine Christians are expected to abstain from all food and drink the entire day to the extent that their health permits. "On this Holy day neither a meal is offered nor do we eat on this day of the crucifixion. If someone is unable or has become very old [or is] unable to fast, he may be given bread and water after sunset. In this way we come to the holy commandment of the Holy Apostles not to eat on Great Friday."

Matins of Holy and Great Friday

The Byzantine Christian observance of Holy and Great Friday, which is formally known as The Order of Holy and Saving Passion of our Lord Jesus Christ, begins on Thursday night with the Matins of the Twelve Passion Gospels. Scattered throughout this Matins service are twelve readings from all four of the Gospels which recount the events of the Passion from the Last Supper through the Crucifixion the burial of Jesus. The first of these twelve readings John 13:31-18:1 is the longest Gospel reading of the year. Just before the sixth Gospel reading, which recounts Jesus being nailed to the cross, a large cross is carried out of the sanctuary by the priest, accompanied by incense and candles, and is placed in the center of the nave (where the congregation gathers), with a two-dimensional painted icon of the body of Christ (soma or corpus) affixed to it. As the cross is being carried, the priest or a chanter chants a special antiphon:
Today He who hung the earth upon the waters is hung upon the Cross (three times). He who is King of the angels is arrayed in a crown of thorns. He who wraps the heaven in clouds is wrapped in the purple of mockery. He who in Jordan set Adam free receives blows upon His face. The Bridegroom of the Church is transfixed with nails. The Son of the Virgin is pierced with a spear. We venerate Thy Passion, O Christ (three times). Show us also Thy glorious Resurrection.

During the service, all come forward to kiss the feet of Christ on the cross. After the Canon, a brief, moving hymn, The Wise Thief is chanted by singers who stand at the foot of the cross in the center of the nave. The service does not end with the First Hour, as usual, but with a special dismissal by the priest.

The next day, in the forenoon on Friday, all gather again to pray the Royal Hours, a special expanded celebration of the Little Hours (including the First Hour, Third Hour, Sixth Hour, Ninth Hour and Typica) with the addition of scripture readings (Old Testament, Epistle and Gospel) and hymns about the Crucifixion at each of the Hours (some of the material from the previous night is repeated). This service is somewhat more festive in character, and derives its name of "Royal" from both the fact that the Hours are served with more solemnity than normal, commemorating Christ the King who humbled himself for the salvation of mankind, and also from the fact that this service was in the past attended by the Emperor and his court.

Vespers of Holy and Great Friday


The epitaphios ("winding sheet"), depicting the preparation of the body of Jesus for burial.
In the afternoon, around the 3 p.m. all gather for the Vespers of the Taking-Down from the Cross, commemorating the Deposition from the Cross. The Gospel reading is a concatenation taken from all four of the Gospels. During the service, the body of Christ (the soma) is removed from the cross, as the words in the Gospel reading mention Joseph of Arimathea, wrapped in a linen shroud, and taken to the altar in the sanctuary. Near the end of the service an epitaphios or "winding sheet" (a cloth embroidered with the image of Christ prepared for burial) is carried in procession to a low table in the nave which represents the Tomb of Christ; it is often decorated with an abundance of flowers. The epitaphios itself represents the body of Jesus wrapped in a burial shroud, and is a roughly full-size cloth icon of the body of Christ. Then the priest may deliver a homily and everyone comes forward to venerate the epitaphios. In the Slavic practice, at the end of Vespers, Compline is immediately served, featuring a special Canon of the Crucifixion of our Lord and the Lamentation of the Most Holy Theotokos by Symeon the Logothete.