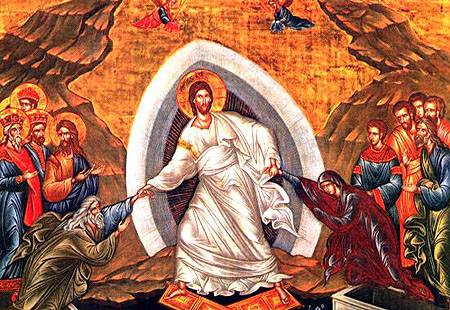 The Feast of Feasts – Pascha


Uskrs (Easter), is considered the holiest of holidays, and is celebrated from Good Friday to Easter Sunday. A seven-week Lenten period is observed, also without fish, meat, eggs, milk, or dairy products, which is practiced today in altered fashion as well. Vrbica, or Palm Sunday, is observed on the last Sunday before Easter when the willow branches are blessed and distributed to all present. This service is rendered especially beautiful and significant by the presence of children, dressed in fine new clothes worn for the first time, with little bells hanging from their necks on Serbian tricolor ribbons—red, blue, and white—waiting for the whole congregation to start an outside procession encircling the church three times.

Easter celebrations cannot be conceived without roasted lamb and colored eggs. The eggs symbolize spring and the renewal of the life cycle as well as Vaskrsenje, the Easter Resurrection. Each color as well as each design has a specific meaning in this age old folk art form of egg decorating.

The Easter Mass is the most splendid one. The doors of the iconostasis, which remained closed until the symbolic moment of Hristovo Voskresenje, or "Christ's Resurrection," open wide; the church bells ring, and the priest dressed in his gold vestments steps forward. The congregation sings a hymn of rejoicing, and a procession led by the banner of Resurrection encircles the church three times while the worshippers carry lit candles. The greetings Hristos voskrese, "Christ has risen," and Vaistinu voskrese, "He has risen indeed," are exchanged three times.


The Date of Pascha

The time of the Great Lent is dependent on the date of Pascha, which varies from year to year. According to a Canon of the First Ecumenical Council (Nicea 325), Holy Pascha is the first Sunday after the first Full Moon which falls upon or immediately after the Spring Equinox (according to ancient reckoning March 21). In addition, this Council decreed that Pascha cannot precede or fall on the Jewish Passover (14th day of the Month Nissan). The Full Moon used for the purposes of calculating the date of Pascha is the fourteenth day of a Lunar Month reckoned according to an ancient ecclesiastical computation and is not the actual astronomical Full Moon.

The number of days between each Full Moon (the Lunar Month) is not exact according to the Solar Calendar and ancient calendars added or subtracted a period called an epact to harmonize the Lunar and Solar Calendars. These epacts as calculated by the Orthodox Church, vary from those calculated by the Western Churches. In addition, the Western Churches do not follow the Nicean Council's decree that Pascha must not precede or fall on the Jewish Passover, and it is for these reasons that there is often a great variance from one year to the next between the Orthodox Church and the Western Churches concerning the date of Holy Pascha.