Our Holy Father Pimen the Much-Ailing 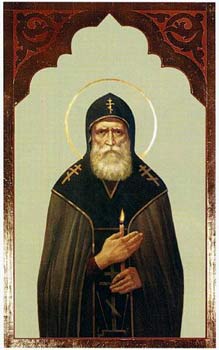 Saint Pimen the Much-ailing attained the Kingdom of Heaven by enduring grievous illness. This Russian ascetic was both born and grew up sickly, but his illness preserved him from illness of the soul.

For a long time he besought his parents to send him to the Kiev Caves monastery. When they brought their son to the famed monastery, they then began to pray for him to be healthy. But the sufferer himself, conscious of the high value of suffering, instead asked the Lord both for the continuation of his sickness, and also his tonsuring into monasticism.

One night, radiant angels appeared in the guise of monks, and tonsured him. They told him that he would receive his health only on the day of his death. Several of the brethren heard the sound of singing, and coming to St Pimen, they found him attired in monastic garb. In his hand he held a lit candle, and his tonsured hair could be seen at the crypt of St Theodosius. St Pimen spent many years in sickness, so that those attending to him could not tolerate it. They often left him without food and water for two or three days at a time, but he endured everything with joy.

Compassionate towards the brethren, St Pimen healed a certain crippled brother, who promised to serve him until death if he were healed. But after a while the brother grew lax in his service, and his former ailment overtook him. St Pimen again healed him with the advice, that both the sick and those attending the sick receive equal reward.

St Pimen spent twenty years in grievous sufferings. One day, as the angels had predicted, he became healthy. In church, the monk took leave of all the brethren and partook of the Holy Mysteries. Then, having bowed down before the grave of Abba Anthony, St Pimen indicated the place for his burial, and he himself carried his bed there.

Pointing to those buried there, one after the other of the monks, and he predicted that the brethren would find one buried in the schema to be without it, since this monk had led a life unworthy of it. Another monk, who had been buried without the schema, would be found clothed in it after death, since he had greatly desired it during his life, and he was worthy.

Then St Pimen lay down upon his bed and fell asleep in the Lord. The brethren buried him with great honor, glorifying God.

After the death of St Pimen, the brethren were persuaded of the truth of his words. On the day of St Pimen's repose, three fiery columns appeared over the trapeza, and moved atop the church. A similar event was described in the chronicles under February 11, 1110 (See the August 5 commemoration of St Theoctistus of Chernigov), therefore the day of demise of St Pimen is surmised as also occurring on February 11, 1110.

The relics of St Pimen rest in the Antoniev Cave.

A second commemoration of the saint is made on September 28, the Synaxis of the Monks of the Near Caves.