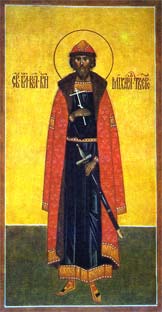 Holy Nobleborn Prince Michael of Tver was born in the year 1272, already after the death of his father Greatprince Yaroslav Yaroslavich, – a brother by birth of holy Nobleborn Prince Alexander Nevsky (Comm. 23 November). On the journey to the Horde prince Yaroslav had fallen ill, and having taken monastic vows with the name Athanasii (Afanasii), he died. Michael's mother, Xenia (Ksenia), raised her son in fervent love towards God. Michael was educated and studied under the guidance of the Novgorod archbishop (probably Kliment). He took the place of his older brother Svyatoslav in the Tver principality. In 1285 he built a stone church in honour of the Saviour's Transfiguration in place of the wooden church of Saints Cosmas and Damian. Upon the death of Greatprince Andrei Alexandrovich (+ 1305), Michael – through right of seniority, received at the Horde the yarlyk-grant to the greatprincely throne. But the Moscow prince Yurii Danilovich would not submit to this, since he sought the greatprincely rule for himself. He was often at the Golden Horde of the new khan Uzbek, who had accepted Mahometanism and was distinguished by his cruelty and fanaticism. Prince Yurii knew how to please the khan, and he married his sister Konchaka and became greatprince. And even with this he did not quiet down, but instead began an internecine war with Tver. In the army of Yurii was also a detachment of Tatars sent by Uzbek, with Kavgadi at the head. But the men of Tver, with holy Prince Michael at the head, on 22 December 1317 defeated Yurii in a route. Many captives were taken, in which number were Kavgadi – whom Saint Michael released, and the Moscow prince's wife Konchaka, who unexpectedly died at Tver. Prince Yurii slandered Saint Michael afront the khan, accusing him of poisoning Konchaka. The khan became enraged, threatening to destroy the princely votchina-holding of Saint Michael, and demanded that he appear to render an answering. Not wishing to spill Russian blood in an unequal struggle with the khan, Saint Michael humbly set out to the Horde, realising that this meant death for him. He took his farewell from his family and from the Tver people, and received blessing for his exploit of martyrdom from his spiritual father hegumen John. "Father, – said the saint, – I was much concerned about the peace of Christians, but through my sins, I was not able to stop internecine war. Now give me blessing, if it should hold having my blood spilled for them, that they might have some respite, and that for me the Lord forgive my sins".
At the Horde an unjust trial was held over the saint, which pronounced him guilty in disobedience to the khan and sentenced him to death. They removed him under guard and put him in an heavy wooden stock. As was his habit, in prison Saint Michael constantly read the Psalter and blessed the Lord for granting him to suffer. He asked not to be abandoned in his present torments. Since the hands of the holy sufferer were secured in the stock, a boy sat before him and turned the pages of the Psalter. The holy prince-captive long languished at the Horde, enduring beatings and ridicule. They suggested that he flee, but the saint bravely answered: "In all my life I never fled an enemy, and if in saving myself my people remained in peril, what glory is it to me? No, let it be as the Lord doth will". Through the mercy of God, he was not deprived of Christian solace: Orthodox priests attended to him, – the hegumens Aleksandr and Mark, and he each week made confession and communed the Holy Mysteries of Christ, receiving before his death a Christian preparation. At the instigation of prince Yurii and Kavgadi, who took revenge on the holy prince for their defeat, assassins rushed into the encampment where the captive was held. They fiercely beat the martyr and kicked at him with their feet, after which one of them stabbed Saint Michael with a knife (+ 1318).
The stripped body of the holy martyr was exposed for abuse, and later they covered him with a cloth and placed him on a large board, attached to a cart. By night two guards were set to watch the body, but fear seized them and they fled. In the morning his body was not on the board. On the previous night many, not only Orthodox by also Tatars, had seen how two radiant clouds did shine over the place where lay the body of the martyr, and although many wild animals roamed the steppes, not one of them had touched him. In the morning everyone said: "Prince Michael is a saint, and innocently murdered". From the Horde the body of the prince was transferred to Moscow, where they buried him in the church of the Saviour-Wood in the Kremlin. It was only a year later in 1319 that at Tver they learned about the fate of their prince. At the wish of his spouse, Princess Anna (Comm. 2 October), and at the request of the Tver people, the relics of Saint Michael of Tver were transferred to his native city and on 6 September 1320 were placed in the church built by him in honour of the Transfiguration of the Lord. Local festal celebration of the holy nobleborn prince began soon after the transfer of his relics to Tver, and at a 1549 Sobor (Council) there took place the general Church glorification of the saint. On 24 November 1632 the undecayed relics of Saint Michael were uncovered. The holy prince has often rendered graced help to the Russian land. In 1606 the Polish and Lithuanians besieging Tver saw repeatedly, how from the city there rode out a wondrous horseman upon a white horse with sword in hand, turning them to flight. Later viewing an icon of holy nobleborn Prince Michael, they affirmed with an oath to the Tver archbishop Theoktist, that the horseman was indeed Saint Michael himself. 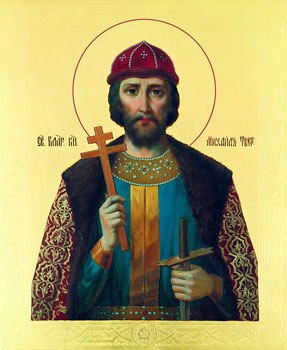