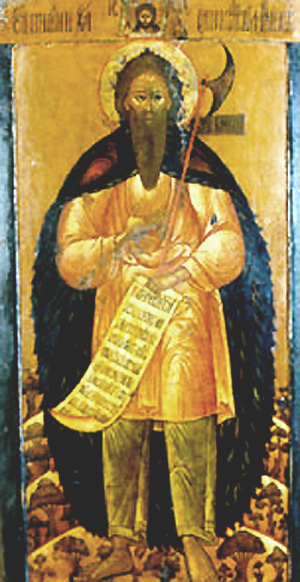 Blessed Lavrentii, Fool-for-Christ and Kaluzhsk Wonderworker, lived at the beginning of the XVI Century at the distance of an half-verst from old Kaluga near a forest church in honour of the Nativity of Christ, set upon an high hill.
There was a long underground entrance from his dwelling to the church, where he heard Divine-services. He lived also at the home of the Kaluzhsk prince Simeon Ioannovich. It is conjectured, that Blessed Lavrentii was descended from the noble Khitrov boyar lineage, since his name initiates their lineage memorial at the Peremyshl'sk Liotykov monastery, situated in the Kaluzhsk diocese. Blessed Lavrentii went barefoot both winter and summer, in a shirt and sheepskin coat. By the deeds of his own doing he so raised himself up, that while still alive he was glorified by gifts of grace.
When the Crimean Tatars fell upon Kaluga in May 1512, Blessed Lavrentii, then in the home of the prince, suddenly shouted out in a loud voice: "Give me my sharp axe, for the curs fall upon prince Simeon and it is necessary to defend him!" Saying this, he seized the axe and left. Suddenly having come on board ship next the prince, Righteous Lavrentii inspired and encouraged the soldiers, and in that very hour they defeated the enemy. He is depicted in icons with an axe in his right hand, set upon a long axe-handle. It is certain that prince Simeon (+ 1518), owing him his safety, built in his memory a monastery on the place of the saint's deeds.
Blessed Lavrentii died on 10 August 1515, evidently, on his nameday. It is known, that the memory of the saint is honoured also on 8 July.
Blessed Lavrentii was glorified, it seems, in the second half of the XVI Century. Thus, tsar Ivan the Terrible in a gramota of donation to the monastery (1565) wrote: "Monastery of the Nativity of Christ, wherein lieth Lavrentii, Fool-for-Christ". In the Life, the first posthumous miracle is recorded under the year 1621 – the healing of the paralysed boyar Kologrivov, who became well after doing a molieben to the saint.