Miracle of the Pillar with the Robe of the Lord under it at Mtskheta (330); The Holy Equal-to-the-Apostles Emperor of Iveria Mirian and the Holy Empress Nana 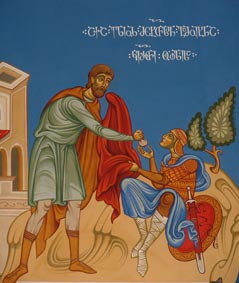 The Feast in Honour of the Chiton (Tunic) of the Lord and the Life-Creating Pillar – is the temple feast of the Mtskheta patriarchal cathedral in honour of the Twelve Holy Apostles, named the Sveti-Tskhoveli (which in translation means "Life-Creating Pillar"). According to the tradition of the Gruzian (Georgian) Orthodox Church, the Chiton (Greek word, in Latin "Tunic") of the Lord – the seamless garment of the Saviour (Jn. 19: 23) – came to the ancient capital city of Gruzia, Mtskheta, in the following manner.
Eleazar (or Elioz), rabbi of the Mtskheta community of Jews, had resettled to Gruzia from Jerusalem already by the year 70 A.D. Having received news from the Jerusalem high-priest Annas about the impending execution of Christ, he hastened to Jerusalem in the company of Longinus Carsnitus [or "carsnifex", the Latin meaning "executioner"]. They became eye-witnesses to the Passion of the Lord and the casting of lots for His garment (Jn. 19: 23-24; Ps. 21 [22]: 18). At the moment when the All-Pure Body of the Lord was nailed to the Cross, the mother of Elioz, situated in Mtskheta, sensed the blows of the hammer in her heart and shuddered out of great fright. Having related to her daughter Sidonia about the crucifixion sufferings of the Saviour, guiltlessly given over unto death, the mother of Elioz then died. Elioz then acquired the Chiton from the soldier who by lots had won it, and he took it with him to Mtskheta. Sidonia, meeting her brother Elioz in tears, told him about the death of their mother and her words just before her death. Elioz confirmed the words of their mother and he showed his sister the Chiton (Tunic) of the Lord. Taking hold the Chiton, Righteous Sidonia kissed it all over, pressed it to her bosom and herewith fell down lifeless. No one, not even the emperor Aderk (2 B.C.-55 A.D.)was able to open the grasp of Sidonia nor take from her the Chiton. Righteous Sidonia (Comm. 1 October) was secretly consigned to earth by her brother Elioz in the imperial garden at Mtskheta.
The holy Equal-to-the-Apostles Nina told about this to the Kartalin Hebrew highpriest Aviathar – a descendent of rabbi Elioz. He came to believe in Christ, having listened to the explanation by Saint Nina of the ancient prophecies concerning the Messiah, and how these prophecies were fulfilled in the Lord Jesus Christ. And the Gruzian emperor Mirian (265-342) was also converted by holy Equal-to-the-Apostles Saint Nina, and he decided to build a Christian church on the spot whereupon the Chiton of the Lord was situated. A massive cedar tree had grown on the grave of Sidonia, which they sawed, and wanted to use its truck as a foundation pillar for supporting the main cupola of the church, but they were not able to raise it upright. Saint Nina prayed all night for Divine help. and visions were manifest to her, in which were revealed the historical courses of destiny of Gruzia.
At dawn an Angel of the Lord approached the pillar and raised it in the air. The pillar, shining with a wondrous light, was elevated and then lowered in the air, until it was set over its base. From the stump of the cedar issued a fragrant myrh. Thus the Angel of the Lord indicated the place, where the Chiton (Tunic) of the Lord was concealed in the ground. This event, witnessed to by many of the inhabitants of Mtskheta, is depicted on the icon, "Glorification of the Gruzian Church". Afterwards at the place of the wooden church was erected the majestic stone cathedral of Sveti-Tskhoveli. The Life-Creating Pillar, from which occurred many healings, has at present a stone four-cornered covering and is crowned by a light-loft, not touching the arch of the cathedral. The Pillar is positioned in the Sveti-Tskhoveli cathedral with a model alongside of the Church of the Sepulchre of the Lord at Jerusalem.
The Gruzian (Georgian) Orthodox Church established the feastday on 1 October in honour of the Chiton (Tunic) of the Lord and the Life-Creating Pillar. 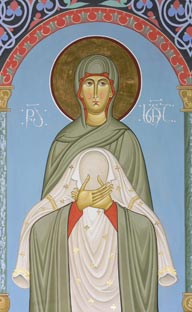 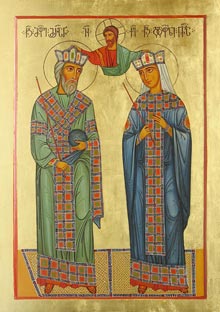 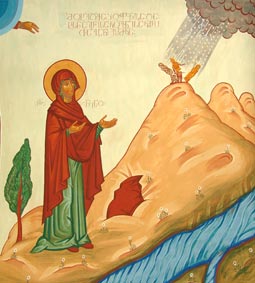 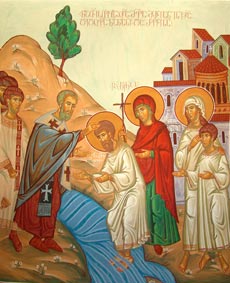 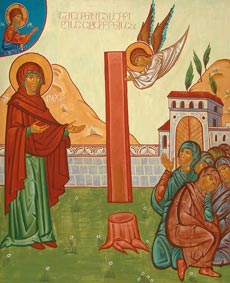