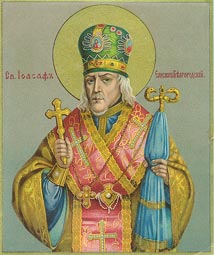 Sainted Joasaph was born at Proluka, in the former Poltava governance, on 8 September 1705, the feastday of the Nativity of the MostHoly Mother of God. At Baptism he was named Joakim. He was descended from the old and venerable Little Russian (Ukrainian) lineage of the Gorlenkovi. In 1712 his father enrolled the 7 year old Joakim in the Kiev Spiritual Academy. Within the walls of the academy he felt the attraction towards monastic life. And over the course of 7 years he studied it further, and finally revealed his intent to his parents. For a long time his mother and father pleaded with their first-born son not to accept monastic tonsure. But in 1725, in secret from them, he became a "ryasophor" ("robe-wearing novice") with the name Ilarion at the Kiev Mezhigorsk monastery, and on 21 November 1727 he was tonsured in monk's-mantle with the name Joasaph at the Kievo-Bratsk monastery. This event co-incided with the completion of his studies at the spiritual academy. After the death of His Grace Varlaam, the Kiev cathedra-chair was governed by archbishop Raphael Zaborovsky. Archbishop Raphael directed his attention to the evident abilities of the young ascetic and drew him into still more widespread a service to the Church. He was entrusted the responsible obedience of the office of examiner of the Kiev archbishopric. In November 1734 archbishop Raphael ordained the monk-deacon Joasaph to the dignity of priest-monk, and he transferred over from the Bratsk monastery school to the Kievo-Sophia archbishop's house. At the same time he was appointed a member of the Kiev religious consistory. In fulfilling the office of examiner, he exerted much effort towards the correction of moral deficiencies among the parish clergy. The consistory office service of the saint proved a fine schooling for his administrative abilities. During this time he made a good study of the needs of clergy-servers, noting both the good points and the failings of the diocese. Herein in clear form developed Joasaph's many-sided ability for matter, combined with great inner spiritual efforts. He quickly rose up the ladder of spiritual perfection, to which he witnesses in his work, "The Conflict of the Seven Venerable Virtues with the Seven Deadly Sins".
On 24 June 1737 Priest-monk Joasaph was appointed head of the Holy Transfiguration Mgarsk monastery, with elevation to the dignity of hegumen. Here the hegumen worked with all his strength to get the monastery in good order, which was an old bulwark of Orthodoxy in the struggle with the Unia. In this monastery were situated relics of Sainted Athanasias, Patriarch of Constantinople and Lubensk Wonderworker (Comm. 2 May). And several times Sainted Athanasias appeared to Hegumen Joasaph, witnessing to his patronal protection.
In 1744 metropolitan Raphael elevated Hegumen Joasaph to the dignity of archimandrite. Towards the end of that same year he was called to Moscow and soon, at the direction of the MostHoly Synod, he was appointed vicar of the Holy Trinity Sergiev Lavra monastery. At this monastery of the Monk Sergei he likewise unstintingly fulfilled obedience to the Church (this year required much exertion for the rebuilding of the monastery after a conflagration).
On 2 June 1748 at the Petropavlovsk (Peter and Paul) cathedral in Peterburg, Archimandrite Joasaph was ordained bishop of Belgorod. Entering upon the archbishop cathedra-chair, Saint Joasaph strictly concerned himself with piety and the condition of the churches, with the proper making of Divine-services and especially the moral condition of his flock. The saint devoted great attention to the education of the clergy, and the correct observance by them of churchly norms and traditions. And just as before, the saint worked with all his strength at the archpastoral service, without regard for his health. To his cell‑attendant Stefan, on the eve of his repose, the saint forbade him to aspire to the priestly dignity and he predicted, that in case of disobedience he would meet with an untimely end. To another dell-attendant Vasilii, the saint indicated that he would be a deacon, but would never attain the dignity of priesthood. And this prediction was afterwards fulfilled. On 10 December 1754 the saint died. Sainted Joasaph was glorified to the ranks of the Saints on 4 September 1911.