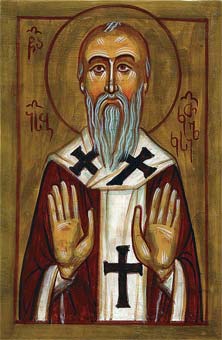 Saint Joseph (Jandierishvili) received his spiritual education at David-Gareji Monastery. He was endowed by the Lord with the gift of wonder-working. His prayers healed the terminally ill and demon-possessed. For his wisdom and virtue, he was consecrated bishop of Rustavi, and in 1755 enthroned as Catholicos-Patriarch. St. Joseph remained a monk-ascetic in spite of his hierarchical rank.
In 1764 Holy Catholicos Joseph, like St. Gregory the Theologian, humbly stepped down from the archpastor’s throne and withdrew to Akhmeta in northeastern Georgia. With his own hands he cultivated a vineyard and distributed his harvest to the poor. The climate in that region was capricious—droughts were frequent, and hail would devastate the fragile crops, laying waste to the farmers’ labors. But while St. Joseph was laboring there, the region suffered neither drought nor hail.
Through St. Joseph’s prayers, the sick were healed and the blind received sight. Those who dwelt near him loved him deeply and put their hope in him. St. Gabriel the Lesser remarked joyfully in one of his writings: “Once I saw and two times I kissed the hand of this holy man.”
Having lived in godliness to a ripe old age, Catholicos Joseph reposed peacefully in the year 1770.