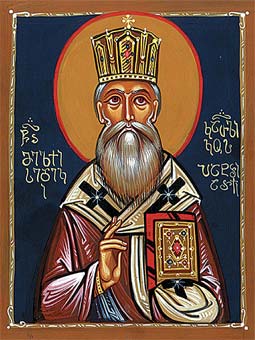 After the repose of Catholicos Simeon, leadership of the Georgian Church passed to Catholicos Melchizedek I. St. Melchizedek led the Church from approximately 1010 to 1030, during the reigns of Kings Bagrat III, George I, and Bagrat IV.
It is believed that St. Melchizedek was the first Georgian Catholicos to be commemorated as Catholicos-Patriarch.
According to historical sources, Catholicos Melchizedek was of a noble lineage and was a pupil of King Bagrat III.
Under his leadership Svetitskhoveli Cathedral was restored and adorned. He journeyed to Byzantium to raise funds for this project, and while he was there he visited Emperor Basil II (the Bulgar-slayer). St. Melchizedek returned to his motherland with generous gifts and began the greatest construction project of the century: the adornment of Svetitskhoveli Cathedral with gold, silver, pearls, and precious stones.
St. Melchizedek made several journeys to Byzantium during his life, and historians believe that during one of those visits the patriarchs of the East approved “Catholicos-Patriarch” as the official title of the chief shepherd of the Georgian Apostolic Orthodox Church.
History has preserved St. Melchizedek’s will, in which he bequeathed a long list of holy objects, monasteries, and villages to Svetitskhoveli Cathedral. In his will the chief shepherd of the Georgian Church is referred to as “Catholicos-Patriarch.” Melchizedek’s will also reveals that he specified the location where he wished to be buried. St. Melchizedek was canonized on October 17, 2002.