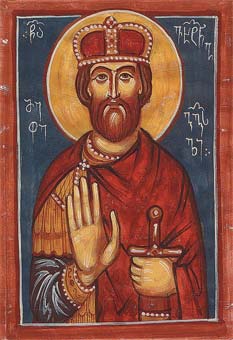 The holy and right-believing king Vakhtang I ascended the throne of Kartli at the age of fifteen. At that time Kartli was continually being invaded by the Persians from the south and by the Ossetians from the north. The situation was no better in western Georgia: the Byzantines had captured all the lands from Egrisi to Tsikhegoji.
After his coronation, the young King Vakhtang summoned his court and addressed his dedicated servants with great wisdom. He said that the sorrowful circumstances in which the nation had found itself were a manifestation of God’s anger at the sins of the king and the people. He called upon everyone to struggle in unity and selflessness on behalf of the Faith and motherland.
King Vakhtang led a victorious campaign against the Ossetians, freed the captive princess (his older sister), and signed several treaties with the Caucasian mountain tribes to secure their cooperation in the struggle against foreign conquerors. Then he carried out another campaign in western Georgia, freed that region from the Byzantines, reinforced the authority of KingGubaz, and returned in triumph to Kartli.
King Vakhtang was remarkable in faith, wisdom, grace, virtue, and appearance (he towered above all others at a stately seven feet ten inches). He spent many nights in prayer and distributed alms to the poor, in this way dedicating his life to God. King Vakhtang could fight tirelessly in battle. Vested in armor and fully armed, he could carry a war-horse on his shoulders and climb from Mtskheta to the Armazi Fortress in the mountains outside the city. On foot he could outrun a deer. The holy king was judicious in politics, displayed great composure, and preserved a sense of calm even when critical decisions needed to be made.
On the brow of Vakhtang’s military helmet was depicted a wolf, and on the back, a lion. Catching a glimpse of the helmet with the wolf and lion, the Persians would cry out to one another: “Dar’ az gurgsar!” (“Beware of the wolf ’s head!”) This was the source of King Vakhtang’s appellation “Gorgasali.”
During King Vakhtang’s reign the Georgian Church was first recognized as autocephalous. When the holy king banished the pagan fire-worshippers from Georgia, he also sent a certain Bishop Michael—who was inclined to the Monophysite heresy, which had been planted in Georgia by the Persians—to Constantinople to be tried by the patriarch. The bishop had disgracefully cursed the king and his army for rising up against the Monophysites. In fact, he was so infuriated that when King Vakhtang approached him to receive his blessing, he kicked him in the mouth and broke several of his teeth.
The patriarch of Constantinople subsequently defrocked Bishop Michael and sent him to a monastery to repent.
More importantly perhaps, the patriarch and the Byzantine emperor then sent to the patriarch of Antioch several clergymen whom King Vakhtang had chosen for consecration. In Antioch the patriarch consecrated twelve of these clergymen as bishops and enthroned a certain Petre as the first Catholicos of Georgia.
Vakhtang fulfilled the will of Holy King Mirian by founding the Georgian Holy Cross Monastery in Jerusalem. In addition, he replaced a wooden church that had been built in Mtskheta at the time of St. Nino with a church made of stone. During his reign several new dioceses were founded. King Vakhtang built a cathedral in Nikozi (Inner Kartli) and established a new diocese there, to which he translated the holy relics of the Protomartyr Razhden.
King Vakhtang built fortresses at Tukhari, Artanuji, and Akhiza; founded monasteries in Klarjeti at Artanuji, Mere, Shindobi, and Akhiza; and established many other strongholds, churches, and monasteries as well. He built a new royal residence in Ujarma and laid the foundations of the new Georgian capital, Tbilisi. His political creed consisted of three parts: an equal union of the Georgian Church with the Byzantine Church, national independence, and the unity of the Church and nation.
In the year 502 the sixty-year-old King Vakhtang was obliged to defend his country for the last time. In a battle with the Persians he was fatally wounded when a poisoned arrow pierced him under the arm. Before he died, King Vakhtang summoned the clergy, his family and his court and urged them to be strong in the Faith and to seek death for Christ’s sake in order to gain eternal glory.
All of Georgia mourned the passing of the king. His body was moved from the royal residence in Ujarma to Mtskheta, to Svetitskhoveli Cathedral, which he had himself built. There he was buried with great honor.
Some fifteen centuries later, with the blessing of Catholicos-Patriarch Ilia II, an addition was built onto the Sioni Patriarchal Cathedral in Holy King Vakhtang Gorgasali’s name, and a cathedral in his honor was founded in the city of Rustavi. 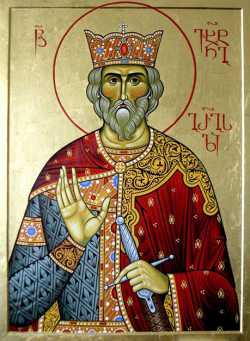