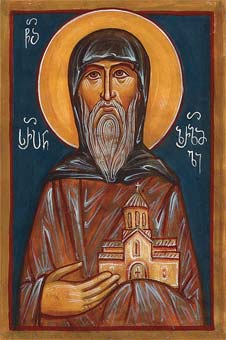 Saint Serapion of Zarzma was the son of a Klarjeti aristocrat famed for his wealth and good deeds. Serapion had two brothers, who were still young when their mother died.
Their father also reposed soon after.
From childhood St. Serapion longed to lead the life of a hermit. With his younger brother, John, he set off for Parekhi Monastery, where he requested the spiritual guidance of “the spiritual father and teacher of orphans,” the great wonderworker Michael of Parekhi.
The older brother remained at home to continue the family tradition of caring for wanderers and the poor.
St. Michael perceived in the young Serapion true zeal for a divine ministry and blessed him to enter the priesthood.
Once, while he was praying, St. Michael was instructed in a vision to send his disciples Serapion and John to Samtskhe to found a monastery.
Serapion was alarmed at the thought of such a great responsibility, but he submitted to his spiritual father’s will and set off for Samtskhe with several companions. He took with him a wonder-working icon of our Lord’s Transfiguration.
The monks climbed to the peak of a very high mountain and, having looked around at their environs, decided to settle there and begin construction of the monastery. But soon the villagers chased the monks away, and the holy fathers located the exact place that their shepherd, St. Michael, had seen in the vision. At that time a faithful nobleman named George Chorchaneli ruled in this mountainous region. Once, while he was out hunting, George saw smoke over the dense forest and sent a servant to discover the cause. He was soon informed that two remarkable monks had settled in that place. Immediately he set off for the spot, humbly greeted the monks, venerated the wonder-working icon, and asked for the fathers’ blessings.
Overjoyed and inspired by Serapion’s preaching, the prince fell on his knees before him and promised to help him in every way to establish the new monastery. Having donated this land and the surrounding area to the monastery, he presented the monks with a deed assigning ownership of all the territory the monks could cover on foot in one day to the future monastery. The prince sent his servant to accompany them.
The brothers walked over unexplored territory, through dense forests, and over rocky paths. Two local residents, the God-fearing Ia and Garbaneli, accompanied them. But not all the local people received the monks so warmly: the residents of Tsiskvili met them with hostility and tried to block their path.
That very same night a miracle occurred: an earthquake split the rocks that were holding back Lake Satakhve and washed away the entire village of Tsiskvili. Only two brothers survived. To this day this place has been called “Zarzma” [the word “zari” is often used to denote a tragic occurrence].
The brethren began to search for a suitable place to build their church. St. Serapion wanted to construct the church on a high hill, but John and the other brothers objected. “It is not necessary, Holy Father, to build in this place,” they said. “It is high and cold here, and the brothers are dressed only in rags.”
To resolve this question, the holy fathers filled two small icon lamps with equal amounts of oil. Serapion placed one of them at the top of the hill, John placed the other near a stream on the southern side of the hill, and they began to pray. At daybreak Serapion’s lamp had already gone out, but John’s lamp continued to burn until midday. Thus they began to build the church in the place that John had chosen.
The monks faced many obstacles in the construction of their church. The area was covered with dense forest, and the stones necessary for building could be found only in the river. At George Chorchaneli’s suggestion, they salvaged the stone from a church that had been destroyed by the earthquake.
After three years of construction, the monastery was completed, and the wonder-working icon of the Transfiguration was placed in the altar of the church. The monks fashioned cells, and St. Serapion established the rules of the monastery.
When he was approaching death, Michael of Parekhi sent two of his disciples to Serapion and John. When he learned that the construction of the monastery was completed, he rejoiced exceedingly and blessed its benefactor, George Chorchaneli. Then he took the withered branch of a box tree and presented it to him, saying, “My son, plant this tree near the church and, if it blossoms again, know that it is God’s will that you zealously continue the work you have begun in His name.” After some time the branch blossomed, and this miracle became known to many.
When the blessed Serapion sensed the approach of death, he summoned the brothers, bade them farewell, and appointed Hieromonk George his successor as abbot. He was buried with great honor on the eastern side of the altar at the monastery church.