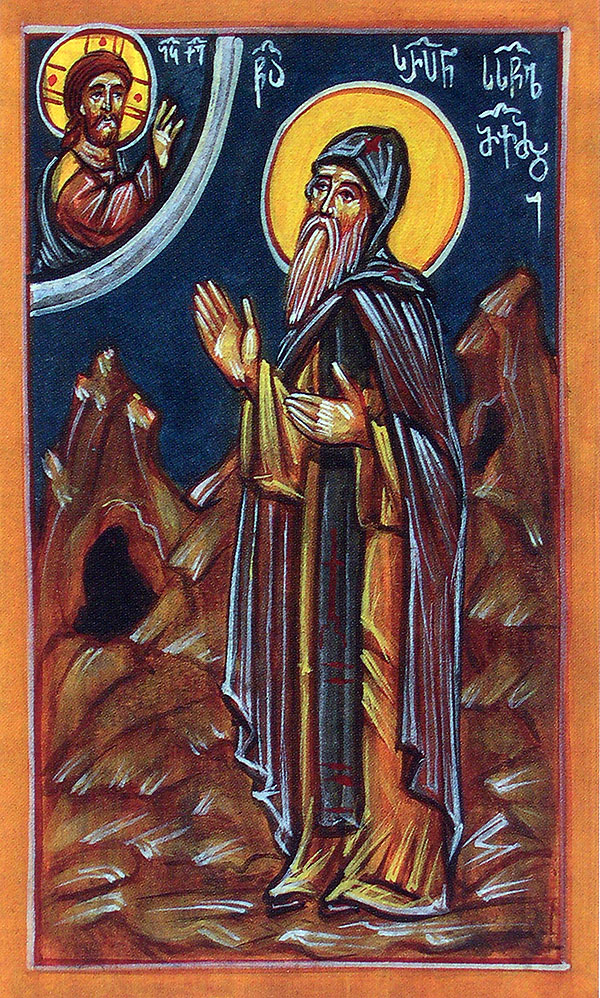 Saint Serapion was abbot of the Monastery of St. John the Baptist in the Davit-Gareji Wilderness. He was endowed by God with the ability to work miracles.
Once St. Serapion set off for the city, following at a short distance behind several of the monastery’s brothers.
While they were traveling, a group of bandits attacked the monks who were walking in front of their abbot and made off with many of the church vessels they were carrying.
Terrified, the monks ran back to Serapion and told him what had happened.
“Great is God!” said Serapion. “I will not permit the unbelievers to steal His sacred things!”
With staff in hand, the elder raced ahead alone in pursuit of the robbers. When the robbers turned back they saw a terrible flame issuing forth from the elder’s staff and became greatly afraid. They abandoned the donkey that had been carrying their spoils and took to their heels. Another time Serapion suddenly burst out of his cell and cried to the brothers, “Woe is me! Woe is me! Robbers have attacked the servants on their way to the monastery!”
Having made this frightening announcement, he returned to his cell and began to pray. After a few hours the distraught servants arrived at the monastery and reported that bandits had attacked them along the way. The servants said that, when fleeing their attackers, they had abandoned the mules that were hauling the monastery’s property. A short time later the mules arrived at the monastery unaccompanied, bearing their load as before.
St. Serapion eventually abandoned his leadership of the monastery. He was tonsured into the great schema and withdrew into seclusion. Soon after, God revealed to him that his death was near, and he asked the brothers to bury him under the church gates, in a grave that he had prepared for himself. He intended for all who entered there to walk over his grave.
St. Serapion reposed in the year 1774.