The Gruzinian (Georgian) Icon of the mother of God 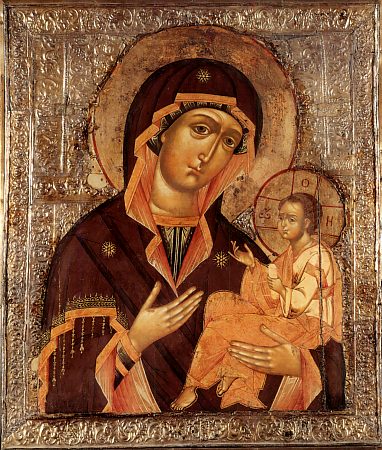 The Gruzinian (Georgian) Icon of the mother of God: In 1622 the Persian shah Abbas conquered Gruzia. Many Christian holy things were plundered and many such were sold to the Russian merchants that were in Persia. Thus, the Gruzinian Icon of the Mother of God came the way of a certain merchant named Stefan, who piously kept it. During this time in Yaroslavl' the merchant Georgii Lytkin – on whose trade-business Stefan was in Persia – received in a dream a revelation about the holy article found by Stefan, and he was commanded to send it off to the Chernogorsk monastery in the Arkhangelsk diocese, founded in 1603. When Stefan returned home in 1629 and showed the icon to Georgii Lytkin, who remembered about his vision and he set off to the Dvina outskirts to the Chernogorsk monastery (called such since it was built on an hilly and somber place, and from of old had been named "Black Mount" ("Chernaya Gora"), but afterwards the monastery was changed in name to "Pretty Hill" ("Krasnaya Gora"). The icon was glorified there by miracles. In 1654 during the time of a pestilential plague the icon was transferred to Moscow, and those praying before it escaped the deadly plague. The many copies of the icon testifies to its deep veneration. In 1658, with the blessing of Patriarch Nikon, there was established an annual feastday of the Gruzinian Icon of the Mother of God. The service was compiled in 1698 under the supervision of Feodor Polikarpov of the Moscow printing-office.