Hieromartyr Nazarius, metropolitan of Kutaisi, Georgia, with Priest-martyrs Herman, Hierotheus, and Simon, and Archdeacon Bessarion (1924); Synaxis of the New Martyrs of Georgia who suffered under the Atheist Yoke (20th c.) 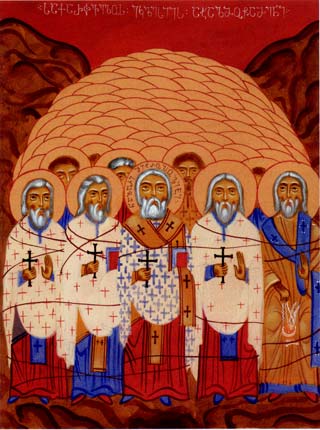 Metropolitan Nazarius of Kutaisi-Gaenati was born in 1872 in the village of Didi Jikhaishi in Imereti. His forefathers belonged to a long lineage of clergy, and the future metropolitan was nurtured in the Church from the earliest years of his youth.
Nazarius (known in the world as Joseph) received his education at Kutaisi Theological School. In 1892 he graduated with honors from Tbilisi Seminary and began to serve in the Church, first as a deacon and later (from February 9, 1893) as a priest. In 1904, after a series of personal tragedies (first his wife died, then his two daughters), Nazarius was tonsured a monk. On November 4, 1918, he was enthroned as Metropolitan of Kutaisi.
The years 1922 to 1923 marked a difficult period in the history of the Georgian Church. The Bolsheviks razed twelve hundred churches, destroyed much of the Church’s wealth, burnt many rare manuscripts, and persecuted spiritual leaders—particularly Georgian nationalists.
On February 10, 1921, following the Red Army’s invasion of Georgia, the treasures of the Sioni and Svetitskhoveli Cathedrals were carried away to Kutaisi for safekeeping. Patriarch Leonid gave his blessing for four boxes of holy objects to be buried under the porch at Metropolitan Nazarius’s residence, which was located on the grounds of the Bagrati Cathedral.
After the Bolsheviks secured their occupation of Georgia, they discovered where the treasures had been buried and arrested Metropolitan Nazarius. They accused him of agitating against the government and concealing the possessions of the Church. During the court proceedings the metropolitan was asked for whom he had hidden the treasure, and he answered, “For the Church and the Georgian people!”
The court sentenced Nazarius to the most severe punishment—execution by a firing squad—but the sentence was subsequently rescinded. In the end, the Bolsheviks imprisoned the hierarch and confiscated his personal belongings.
In April of 1924 Metropolitan Nazarius received amnesty and was released after two years in prison. He returned to his diocese, which was undergoing many trials. He was not permitted to return to his own residence, but was obliged to live with his brother, while his former home was transformed into a storage facility.
On August 14, 1924, a delegation from the village of Simoneti came to the metropolitan to request that he consecrate their local church. At the appointed time, the metropolitan arrived in Simoneti with his retinue and consecrated the church. That night, a group of Chekists (Soviet security agents) broke into the house where Metropolitan Nazarius and his entourage were staying, bound and beat them, and then dragged them to the village council. Without an investigation, the Troika (a Soviet extraordinary council of three judges) sentenced to death Metropolitan Nazarius and four other clergymen—Priest Herman Jajanidze, Priest Hierotheos Nikoladze, Priest Simon Mchedlidze, and Archdeacon Besarion Kukhianidze. They were shot to death in the Sapichkhia Forest.
In 1994, with the blessing of Catholicos-Patriarch Ilia II, the full Ecclesiastical Council of the Georgian Church resolved with one accord to canonize Metropolitan Nazarius and the clergymen who were martyred with him. At the same time, the council canonized all the Orthodox Christians who, for their Faith and the independence of their homeland, became victims of the totalitarian regime. They were proclaimed the “New Martyrs of the Georgian Church.”