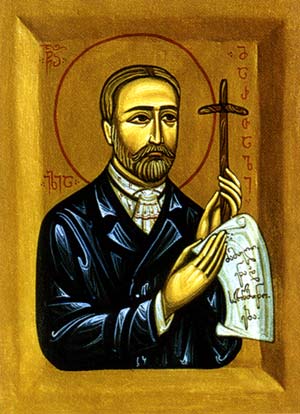 Saint Ilia, called the “Uncrowned King of Georgia,” the “Father of the Nation” and “the Righteous,” belonged to the noble family Chavchavadze. He was born on October 27, 1837, in the village of Qvareli in Kakheti. He received his primary education at home: his mother instructed him in reading and writing, prayer and the law of God. When he was eight years old, Ilia was sent to study with Archdeacon Nikoloz Sepashvili of Qvareli. The years he spent there left an indelible impression on this holy man’s life.
Ilia continued his education at a Tbilisi boarding school, and later at the court gymnasium (high school). His parents died at a young age, and the orphaned children were entrusted to the care of their aunt Macrina.
In 1857 Ilia enrolled in the law school at St. Petersburg University. There he read a great deal and struggled to improve himself as an individual. He was fascinated by Georgian history and spent much of his time in the St. Petersburg archives in search of old Georgian texts. His academic achievements were outstanding, but he was uninterested in receiving an official diploma from the school of law. In his fourth year he dropped out of the program and returned to Georgia.
Ilia was certain that a nation that forgets its own history “is like a beggar who knows neither his past nor where he is going.” For this reason he sought to inspire his fellow countrymen with the past glories of their nation and the loyalty of their forefathers to the Christian Faith and the Georgian nation.
The restoration of national independence and the autocephaly of the Georgian Church were the chief objectives toward which St. Ilia strove in every aspect of his life. As a means by which to achieve these goals, Ilia took up the work of a historian: he conducted intensive research and exposed those who had falsified history and dishonored the Georgian nation.
This great philosopher, writer, and historian often repeated the statement “A nation whose language is corrupted can no longer exist as a nation.” He cared deeply about the Georgian language and fought to ensure that it remained the primary language taught in schools.
Ilia inspired many with his patriotic zeal, and he founded the Society for the Propagation of Literacy among the Georgians. He established a depository of Georgian manuscripts and antiquities. In addition he initiated a movement to document oral folk traditions and helped to found the Georgian Agrarian Bank.
Ilia the Righteous was often heard declaring, “We, the Georgian people, have inherited three divine gifts from our ancestors: our motherland, our language and our faith. If we fail to protect these gifts, what merit will we have as men?”
But Ilia’s righteous deeds were an affront and threat to those who adhered to the new atheist ideology, so they plotted to kill him. On August 30, 1907, Ilia Chavchavadze and his wife, Olga (Guramishvili), had just set off from Tbilisi for Saguramo when their carriage stopped abruptly outside of Mtskheta, near Tsitsamuri Forest.
They were awaited by a band of militant social democrats who attacked them and shot Ilia to death.
The Military Court of the Caucasus sentenced Ilia Chavchavadze’s murderers to death by hanging. But Ilia’s wife Olga requested that the governor-general pardon her husband’s murderers. She asserted that, if Ilia had survived, he would have done the same, since the killers were simply his “unlucky brothers gone astray.”
Indeed, Ilia had forgiven his murderers’ offense long before, in his prophetic poem “Prayer”:

Our Father Who art in Heaven!
With tenderness I stand before Thee on my knees;
I ask for neither wealth nor glory;
I won’t debase my holy prayer with earthly matters.
I would wish for my soul to rest in heaven,
My heart to be radiant with love heralded by Thee,
I would wish to be able to ask forgiveness of mine enemies,
Even if they pierce me in the heart:
Forgive them, Lord, for they know not what they do!

In 1987 the Holy Synod of the Georgian Orthodox Church considered the deeds of Ilia Chavchavadze before God and his country and decreed him worthy to be numbered among the saints. He was joyously canonized as St. Ilia “the Righteous.”