Martyr Salome of Jerusalem and Kartli, who suffered under the Persians (13th c.) 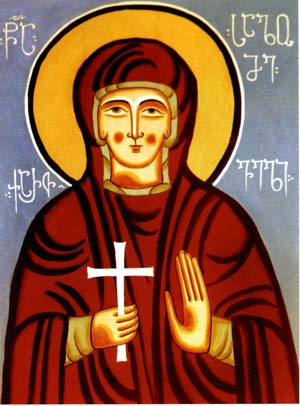 Very little information has come down to us about the holy martyr Salome of Jerusalem and Kartli, who lived in the XIII century at a women's monastery in Jerusalem. She was arrested by the Persian Moslems because of her outspoken defense of Christ.
The SYNAXARION of the Monastery of the Holy Cross in Jerusalem, where she was martyred, tells us that at first, she gave in to the threats of the Persians and denied Christ. Later, however, she repented and publicly confessed Christ as the Son of God and the Savior of the world.
St Salome was tortured by the Persians because of her faith in Christ. Finally, she was beheaded and her holy relics were thrown into the fire.
It is believed that she was executed after the martyrdom of St Luka of Jerusalem, which occurred on February 12, 1277.