The Hieromartyr Marcellus, Bishop of Apamea 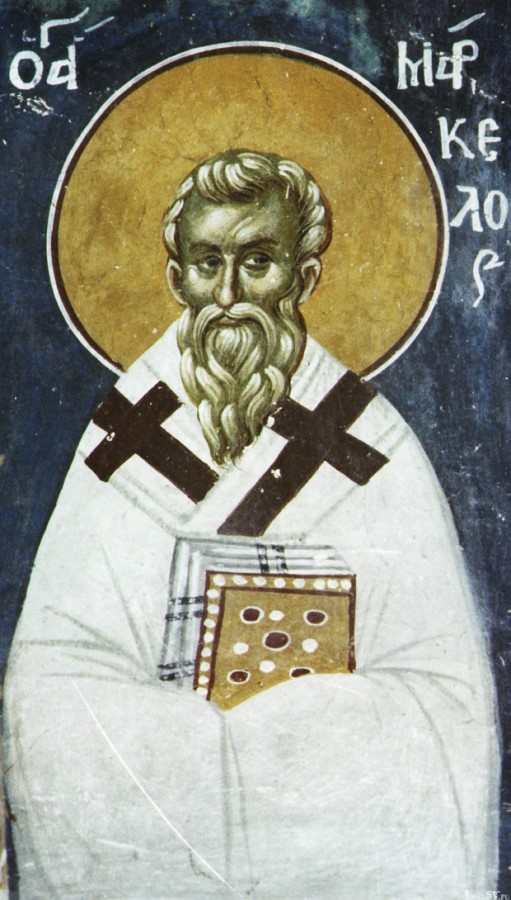 The Hieromartyr Marcellus, Bishop of Apamea, was born of illustrious parents on the island of Cyprus. Having received a fine education, he occupied a high civil office. Everyone marveled at his purity of life, mildness, kindness and eloquence. In the year 375, the saint left his wife and children, and devoted himself to a monastic life in Syria. The people of Apamea, having him come to the city on some practical matter, elected him as bishop.

From the account of Theodoret of Cyrrhus we learn that St Marcellus received permission from the emperor St Theodosius the Great (379-395) to destroy a strongly built temple of Jupiter at Apamea, but the saint didn't know how to accomplish this. A certain worker promised to help him. He undermined three of the huge columns, propping them up temporarily with olive wood. Then he tried to set them afire, but the wood would not burn. When St Marcellus learned of this, he performed the Lesser Blessing of Water, and he commanded that this water be faithfully sprinkled around the wood. After this, the wood burned quickly, the columns fell down and the whole pagan temple collapsed in upon itself.

When soldiers near Aulona in the Apamea district demolished another pagan temple, the saint, watching from a distance, was seized by pagans and thrown into a fire. The killers were found, and the saint's sons wanted to take revenge. A local Council forbade them to do this, decreeing that it would be wrong to avenge such a death as the saint had received. Instead, they ought to give thanks to God.