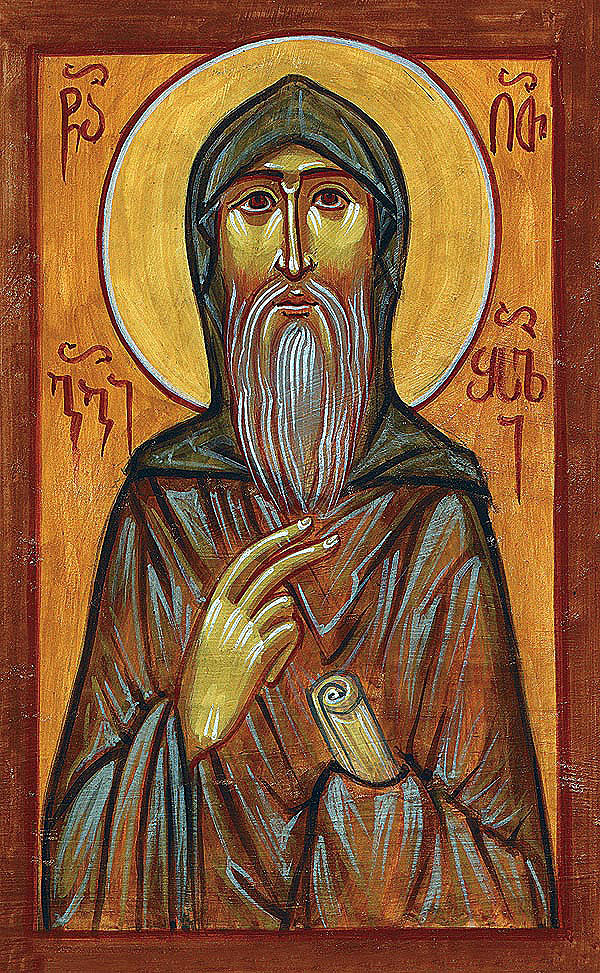 Saint George the God-bearer and Recluse labored in the Black Mountains near Antioch during a time when the churches and monasteries there flourished. Orthodox Christians from many parts of the world came to settle there, and as a result, tensions often arose between monks of different nationalities. In order to remain detached from the conflicts, Fr. George found refuge in an impregnable cleft of a very high mountain. For this reason he is also called St. George the Recluse.

Then, after sending him on a pilgrimage to Jerusalem, he blessed George to resettle at the Iveron Monastery on Mt. Athos and to continue the holy work of St. Ekvtime of Mt. Athos.

George returned to the Holy Mountain but, instead of translating books as his spiritual father had advised him, he performed other obediences for seven years. When St. George the Recluse heard this, he sent his disciple Theodore to Mt. Athos to rebuke him and remind him that he was sent there to translate theological texts from the Greek to the Georgian language. This time George of the Holy Mountain humbly obeyed the will of his teacher.

When he was not with George of the Holy Mountain, St. George the Recluse confined himself to strict solitude and, like his spiritual son, dedicated much of his time to literary pursuits. He was closely acquainted with the writers of Iveron and other Georgian monasteries, and he encouraged his spiritual son to continue his labor of translating Orthodox theological literature.

St. George the Recluse copied Davit Mtbevari’s translations of the Life of Martha (the mother of Simeon of the Wonderful Mountain) and the Life of St. Barlaam (of the Syro-Caucasus). When George heard that no copies of these Lives existed on Mt. Athos, he transcribed the texts and sent them to the Athonites.

St. George the God-bearer and Recluse reposed in 1068, after the death of his venerable disciple St. George of the Holy Mountain.