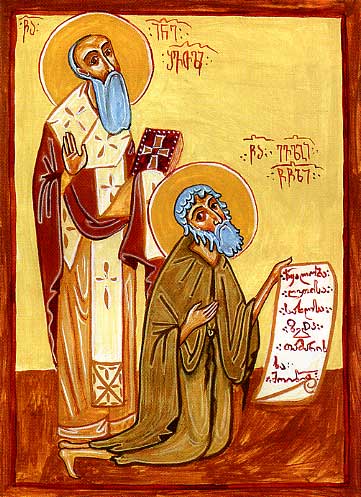 The Monk John Shauteli – was a distinguished Gruzinian (Georgian) poet, philosopher and rhetorician of the XII (XIII) Century. In his youth he received an excellent education at the Gelata academy (Western Gruzia), where he studied the works of the holy fathers, ancient and Arabic history, philosophy and literature. The saint later accepted monasticism and for many years he asceticised at the famed Cave monastery of Bardzia (in South Gruzia), in a solitary cell. Here, adding work upon work, the Monk John led the life of a strict ascetic, constantly devoting himself to prayerful meditations about the Trinity, the world-creation, the destiny of man and a deep insight into the meaning of the Holy Scripture.
In his constant effort he attained to an high degree of spiritual perfection and he received a remarkable gift of words, revealed in his poetic creativity.
At the Bardzia monastery during the years 1210-1214, the Monk John wrote a remarkable Ode, "Abdul-Messiya" ("Servant of Christ"), in which he intoned the image of the Christian, faithful to the canons of the Holy Orthodox Church. In the ode the monk calls himself very much a "wanderer" and "servant of Christ". Many a prayerful strophe is dedicated in it to the holy Nobleborn Gruzian emperor Saint David III the Restorer (+ 1125, Comm. 26 January) and to the holy Nobleborn Gruzian empress Saint Tamara the Great (+ 1212, Comm. 1 May and on the Sunday of the Myrh-Bearing Women).
Shota Rustaveli, for whom the Monk John Shauteli was a literary predecessor, exclaimed, "For the Abdul-Messiya Shauteli did sing resounding poetic strophe, – he was a master in the art!" The theological significance of the "Abdul-Messiya" is particularly evident in those strophic verses, where the poet offers up prayers in the Name of the MostHoly Trinity, to give thanks to the Trinity-Almighty and Divine Providence, for having vouchsafed mankind salvation in Christ. Speaking about the array of the world-creation by God, the Monk John writes, in concurrence with the works of Saint Dionysios the Areopagite (+ 96, Comm. 3 October), about the Coelestial and Ecclesial Hierarchies.
In another of his works – "The Song to the Bardzian Mother of God" – the Monk John Shauteli eulogised the historical Basian Battle (1204), in which the Gruzian national military forces, proceeding forth from the Bardzian monastery, routed a 400,000 strong Musselman army led by sultan Rukn-ed-din. Thanks to this victory, Gruzia preserved its independence and remained an outpost of Orthodoxy in the Middle East, and this undoubtedly contributed to the strengthening of the oneness of the faith of Byzantium.
The Monk John Shauteli reposed in extreme old age. His memory from of old is venerated by the Gruzinian Church.