The Holy Prophet Micah the Second 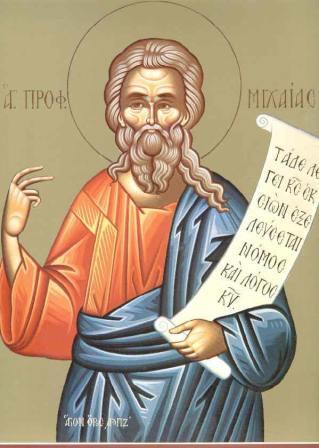 The Prophet Micah, the sixth of the Twelve Minor Prophets, was descended from the Tribe of Judah and was a native of the city of Moresheth, to the south of Jerusalem. His prophetic service began around the year 778 before Christ and continued for almost 50 years under the kings of Judah: Jotham, Ahaz, and Righteous Hezekiah (721-691 B.C., August 28).

He was a contemporary of the Prophet Isaiah. His denunciations and predictions were in regard to the separate kingdoms of Judah and Israel. He foresaw the misfortunes threatening the kingdom of Israel before its destruction, and the sufferings of Judah during the incursions under the Assyrian emperor Sennacherib.

To him belongs a prophecy about the birth of the Savior of the world: "And thou, Bethlehem, house of Ephratha, art too few in number to be reckoned with the thousands of Judah; yet out of thee shall come forth to Me, one who is to be a ruler in Israel, and His goings forth were from the beginning, even from eternity" (Mic. 5: 2). From the words of the Prophet Jeremiah (Jer. 26: 18-19), the Jews evidently were afraid to kill the Prophet Micah. His relics were discovered in the fourth century after the Birth of Christ at Baraphsatia, through a revelation to the Bishop of Eleutheropolis, Zeuinos.


Apolytikion in the Second Tone

As we celebrate the memory of Thy Prophet Michaias , O Lord, through him we beseech Thee to save our souls.

Kontakion in the Fourth Tone

With the Holy Spirit's beams wast thou enlightened, setting forth in prophecy the condescension of Christ God, O blest Michaias; and by His grace we who revere thee are saved from eternal death. 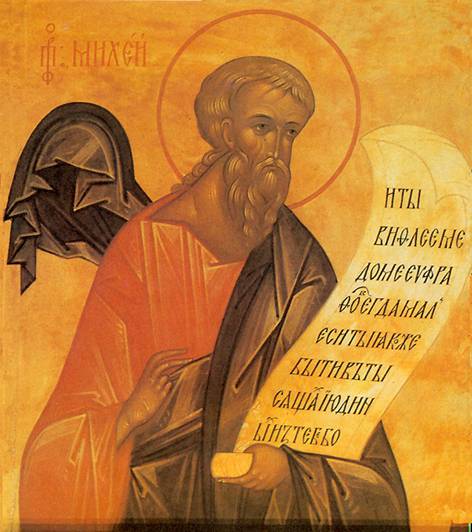