Our Holy Father Nicolas the Soldier 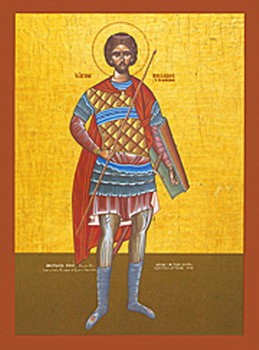 Saint Nicholas the Former General was a military commander under the Byzantine emperor Nicephorus I (802-811). He was ordered to lead his troops against the Bulgars. On the eve of battle he was approached by the innkeeper's daughter, but he resisted her shameless attempts to seduce him.

All his comrades perished in the battle, but Nicholas remained alive. It was revealed to him in a vision that his life was spared because he had overcome temptation. After this St Nicholas left the world, settled into a cave. He became a schemamonk, and prayed unceasingly for his fallen soldiers. By his great ascetic efforts he so pleased the Lord, that he was granted the gift of clairvoyance.