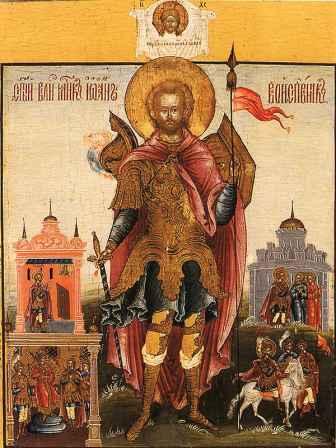 The Holy Martyr John the Warrior served in the imperial army of the emperor Julian the Apostate (361-363). He was sent with other soldiers to seek out and kill Christians.While appearing to be a persecutor, St John rendered great help to the Christians. He freed those who had been arrested, warned others of dangers threatening them, and assisted in their flight. St John showed charity not only to Christians, but to all the destitute and those needing help. He visited with the sick, and he consoled the grieving. When Julian the Apostate learned about the actions of the saint, he ordered him locked up in prison.

In the year 363 Julian the Apostate was killed in his war with the Persians. St John was set free and devoted his life to service of neighbor, and he lived in holiness and purity. He died in his old age.

The precise year of his death is unknown, and the place of burial of St John the Warrior was gradually forgotten. Then he appeared to a certain devout woman and indicated the location of his tomb. This became known throughout the region. His uncovered relics were placed in a church of the Apostle John the Theologian in Constantinople. The Lord granted the relics of St John the Warrior the power of healing. Through the prayers of St John, the aggrieved and sorrowing received comfort.

In the Russian Church, St John the Warrior is revered as a great intercessor in sorrows and difficult circumstances. We also pray to him for the recovery of stolen articles.