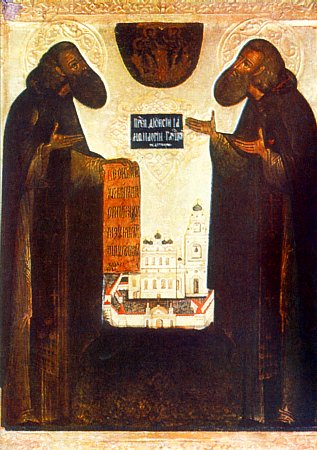 The Monk Amphylokhii, Hegumen of Glushetsk, already a monk of priestly dignity, came from Ustiug to the monk Dionysii of Glushetsk (Comm. 1 July) in the year 1417. Saint Dionysii, learning of the wish of Amphylokhii to become an ascetic, told him about the severity and harshness of life in his monastery, but this did not deter the newcomer. Then Saint Dionysii said: "If thou wishest to dwell here, then we shalt make a testament – not to be distinct one from another, while we dwell upon the earth". Amphylokhii joyfully agreed and vowed to fulfill the ustav (rule) of the monastery.
The Monk Amphylokhii spent twenty years in deeds of fasting, prayer and obedience under the guidance of the Monk Dionysii, striving in all things to imitate him and assisting in the work of building up the monastery. After the death of Saint Dionysii, the Monk Amphylokhii was for 15 years the head of the Glushetsk monastery. The monk died peacefully in the year 1452 and was buried alongside his preceptor.