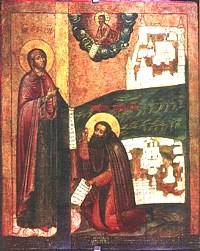 The Monk Tryphon, Archimandrite of Vyatsk, came of pious parents, living in Arkhangelsk diocese. His parents intended to marry Tryphon off, but he had from his youthful years a desire for the monastic life, and he secretly left his home for the city of Ustiug, where he took up residence with a parish priest who dwelt in strict fasting and prayer. And then he lived in the town of Orletsa nearby the church, enduring hunger and cold, and from there he moved on to the Pyshkorsk monastery at the River Kama. Here the Monk Tryphon was received into monastic life and received tonsure under the hegumen Varlaam. The 22 year old monk did not pass up a single church service, and he did heavy obedience in the bakery. When he fell grievously ill, Saint Nicholas appeared to him and healed him, encouraging him in ascetic effort.
In search of solitude, the monk went to the Mulyanka River and settled at the place where now is situated the city Perm. Here he converted to Christianity the pagan Ostyaks and Voguli. Then the Monk Tryphon withdrew to the River Chusova and founded there a monastery in honour of the Uspenie-Dormition of the MostHoly Mother of God. In 1580 he arrived in the city of Khynov in Vyatsk diocese, and likewise he founded there an Uspensk monastery and was made archimandrite. Being a strict ascetic, he wore an hairshirt on his body and also heavy chains. The soul of the elder thirsted for the enlightenment of the lost with the light of faith in Christ. He devoted all his energy to this holy effort.
Before his death, the Monk Tryphon wrote a last testament to the brethren, in which he says: "Fathers and brethren, thou flock gathered about Christ! Heed me, a sinner. Though I be coarse and worse than any, God and His All-Pure Mother have permitted me, a sinner, to manage His household. I beseech ye, for God and His All-Pure Mother, have spiritual love amongst yourselves. Without this no virtue is complete before God. The lips of Christ bespoke the disciples: "Love one another" (Jn. 13: 34). And in the words of the Apostle Paul: "Bear each other's burdens" (Gal. 6: 2). Condemn ye not one another before God, whether in the temple or in the cell, either alone or in common with the brethren. Do fearfully your cell prayers. And by no means neglect church singing; although there be other matters, hasten to church to God for spiritual song. First give to God what is God's, and then fulfill the other matters". The Monk Tryphon expired to the Lord in old age in 1612. He was buried in the Vyatsk monastery founded by him.