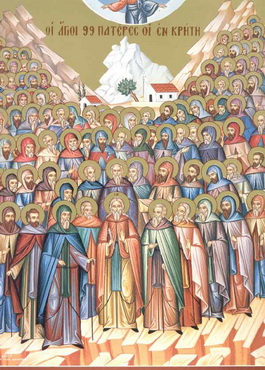 Saint John the Hermit and thirty-five companions lived in Egypt, but took ship as a group for Cyprus in order to practice ascesis in exile. At Cyprus they met a party of thirty-nine others who also sought to live the ascetic life more fully, and the two groups joined. "In order that these ascetics, too, might taste of the graces of voluntary exile" (Synaxarion), they traveled to Attalia in Pamphylia. There, twenty-four more monks joined them, so that their company now numbered ninety-nine. (This number was ordained by God, so that Christ Himself, their Head, would complete their number at one hundred.) After some time they took ship again for Crete, where they lived in two caves in a remote, deserted area, living only on the plants that grew wild there.
Saint John sought his brothers' blessing to live as a hermit. On the day of his departure they prayed that they all might repose on the day of John's death, and enter together into the Kingdom of God. John's asceticism was so severe that after awhile he could no longer walk, but crawled from his cave to gather the small quantities of food he allowed himself. A shepherd, seeing him from a distance, thought that he was some animal, and shot him with an arrow. Finding the dying John, the shepherd was stricken with horror and grief, and threw himself at the hermit's feet, begging forgiveness. The saint only lived long enough to give the young man his pardon and blessing before surrendering his soul to God. The prayer of his ninety-eight brethren was mysteriously granted: between the third and seventh hour of that day, they all, one after another, fell asleep in peace. 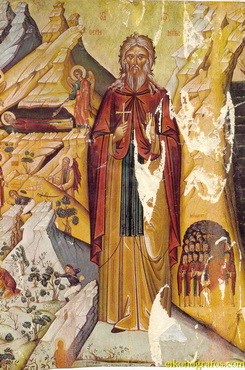