Our Holy Mother Angelina of Serbia 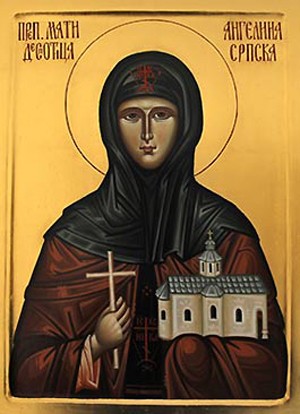 Saint Angelina was the daughter of Prince George Skenderbeg of Albania. Her mother's name is not known, but she raised her daughter in Christian piety and taught her to love God.

St Stephen Brancovich (October 9 and December 10), the ruler of Serbia, had come to Albania to escape those who wished to kill him. Some time before he arrived in Albania, St Stephen was unjustly blinded by the Turkish Sultan for some perceived offense. Since he was innocent, he bore his affliction with courage.

St Stephen was not only Prince George's guest, but he was also treated as a member of his family. Not surprisingly, Stephen and Angelina eventually fell in love. With her parents' blessing, they were married in church. After a few years, they were blessed with two sons: George and John.

When the boys were grown, St Stephen and his family were forced to flee to Italy for their safety. At that time the Turks invaded Albania and began to slaughter men, women, and even children.

St Stephen died in 1468, leaving Angelina a widow. In her distress, she turned to the ruler of Hungary for help. He gave them the town of Kupinovo in Sirmie.

St Angelina left Italy with her sons in 1486, stopping in Serbia to bury St Stephen's incorrupt body in his native land.

The children of these pious parents also became saints. George gave up his claim to the throne in favor of his brother John, then entered a monastery and received the name Maximus.

John was married, but had no sons. He died in 1503 at a young age, and many miracles took place before his holy relics.

St Angelina survived her husband and both of her sons. Mindful of her soul's salvation, she entered a women's monastery. She departed to the Lord in peace, and her body was buried in the same tomb as her sons in the monastery of Krushedol in Frushka Gora.

St Angelina is also commemorated on December 10 with her husband St Stephen and her son St John.

Troparion - Tone 8
The image of God was truly perserved in you, O Mother,
for you took up the Cross and followed Christ.
By so doing you taught us to disregard the flesh for it passes away,
but to care instead for the soul, since it is immortal.
Therefore your spirit, O venerable Angelina, rejoices with the angels.