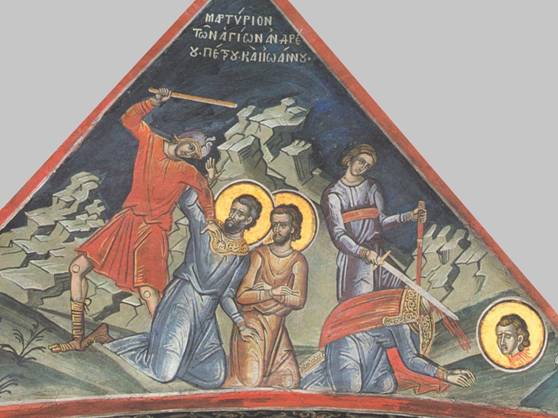 The Holy Martyrs Andrew and John, and John's Children Peter and Antoninus (IX), suffered during the time of the cruel African ruler Ibrahim. After the taking and destruction of the Sicilian city of Syracuse, Ibrahim took captive and brought to Africa Saint John and his two children, Peter and Antoninus, whom he compelled to study the Arab language and sciences. When the youths had grown, prince Ibrahim was so fond of them for their wisdom and virtuous life, that he named Antoninus his kinsman, and Peter he appointed as his chief steward. One time however, having learned that the youths secretly confessed faith in Christ, Ibrahim fell into a furious rage and ordered them thrown into iron shackles and beaten with knotted rods. After prolonged scourging, they put Saint Antoninus on a donkey, and secured on by straps they drove him through the city, beating and ridiculing him with abuse. The martyr endured all the insults and gave thanks to God. Saint Peter after fierce beating with the rods was thrown into prison. The father of the holy martyrs, John, was ordered to be arrested. The brutal Ibrahim grabbed him by the neck with his left hand, and with his right he thrust a knife into his throat. They threw the body of the father together with the bodies of his sons. They then lighted up a large bonfire, into which they cast the bodies of the holy martyrs.
Concerning Saint Andrew, the torturer for a long time wore him down with hunger, and then ran him through with a spear in the chest. When the martyr prayerfully began to give thanks to God, Ibrahim ran him through a second time. As he lay expiring from loss of blood, they then beheaded the righteous martyr with a sword.