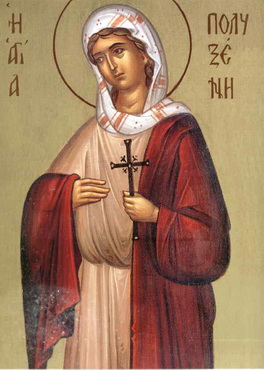 The Monastic Women Xanthippa and Polyxenia were sisters by birth and they lived in Spain during the time of the holy Apostles. They were among the first to hear the Divine teaching of Christ the Saviour from the holy Apostle Paul, when he preached in their land. Saint Xanthippa together with her husband Probus accepted Christianity, but Saint Polyxenia was still a paganess, when a certain man became entranced with her extraordinary beauty and forcibly carried her off to Greece. But the Lord preserved her unharmed. On the ship voyage, the saint heard the preaching of the holy Apostle Peter and believed in Christ. Upon arriving in Greece Saint Polyxenia turned to the Christians for protection and defense and was hidden by them in the city of Patra in the Achaia region, where she formal acceptance Christianity and was baptised by the holy Apostle Andrew the First-Called himself. She became a witness to his miracles, and also to his patient and humble endurance of his sufferings and death. She stood at the cross upon which they crucified the holy Apostle Andrew. After his martyr's end, Saint Polyxenia returned to Spain, where together with her older sister Xanthippa she converted many a pagan to Christ. Saint Polyxenia toiled for about forty years at preaching the Gospel in Spain. Saint Xanthippa shared in the exploit and toil of her sister and preached in the populous city of Toledo.
Saint Polyxenia reposed in about the year 109, up to the end of her earthly life having preserved her virginity. 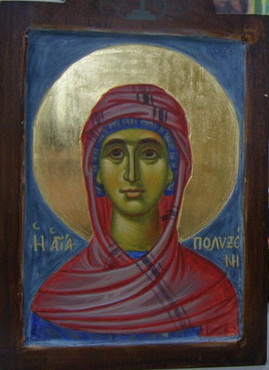