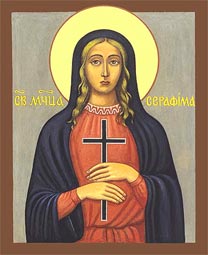 The Holy martyr Seraphima the Virgin, a native of Antioch, lived at Rome during the reign of the emperor Hadrian (117-138) with the illustrious Roman Sabina, whom the saint converted to Christianity. During the persecution against Christians begun by order of the emperor, the governor Virilus gave orders to bring St Seraphima to trial. Desiring a crown of martyrdom from the Lord, she fearlessly went to the executioner at the first summons. The devoted Sabina accompanied her. Seeing that illustrious lady, Virilus at first set the maiden free, but after several days he again summoned St Seraphima and began the trial.