Our Holy Father Nicolas the Confessor 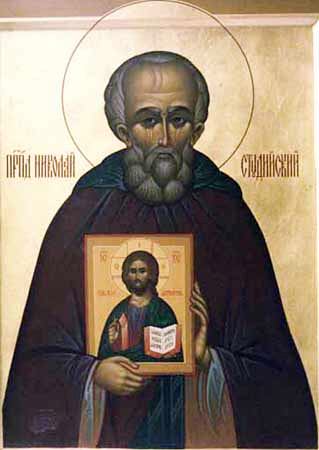 Saint Nicholas the Confessor, Igumen of the Studion Monastery, lived during the ninth century. He was born on the island of Crete in the village of Kedonia into a Christian family. When he was ten, his parents sent him to Constantinople to his uncle, St Theophanes (October 11), who was a monk at the Studion monastery. With the approval of St Theodore (November 11), the head of the Studion monastery, the boy was enrolled in the monastery school. When he finished school at sixteen years of age, he was tonsured a monk. After several years, he was ordained a priest.

During this time there was a fierce persecution, initiated by the Byzantine emperor Leo the Armenian (813-820), against those who venerated the holy icons. St Nicholas and St Theodore the Studite were repeatedly locked up in prison, tortured in various ways, and humiliated. However, they zealously continued to defend Orthodoxy.

Under the holy Empress Theodora (February 11), who ruled the realm while her son Michael was still a minor, icon veneration was restored, and a time of relative peace followed. St Nicholas returned to the Studite monastery and was chosen its head. But this calm did not last very long.

The Empress Theodora was removed from the throne, and the emperor's uncle, Bardas, a man who defiled himself by open cohabitation with his son's wife, came to power. The attempts of Patriarch Ignatius (October 23) to restrain the impiety of Bardas proved unsuccessful. On the contrary, he was deposed from the patriarchal throne and sent into exile.

Unwilling to witness the triumph of iniquity, St Nicholas left Constantinople. He spent seven years at various monasteries. Later on, he returned as a prisoner to the Studite monastery, where he spent two years imprisoned, until the death of the emperor Michael (855-867) and Bardas. Whenthe emperor Basil I the Macedonian (867-886) ascended the throne, St Nicholas was set free, and again became igumen on the orders of the emperor. Because of his life as a confessor and ascetic he received from God the gift of healing, which continued even after his repose in the year 868.