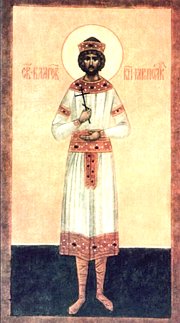 Holy Nobleborn Prince Yaropolk Izyaslavich, in Holy Baptism Peter, was the grandson of Yaroslav the Wise, and great-grandson of holy Equal-to-the-Apostles Vladimir. He shared the sad fate of his father, the Kievan Greatprince Izyaslav, expelled by his brothers from Kiev. Yaropolk journeyed on various missions for his father to the Polish king, the German emperor, and the Roman Bishop Saint Gregory VII (1073-1085). Upon the death of Greatprince Svyatoslav in 1078, prince Izyaslav was restored to the greatprincely throne, and Yaropolk received Vyzhgorod. After the death of his father there was given him the appanage-holding the city of Vladimir-Volynsk, from whence the Rostislavichi attempted to displace him. On the way from Vladimir to Zvenigorod-Galitsk, Yaropolk was treacherously murdered by Neryadets, one of his retainers (+ 1086). The murderer indeed had been bribed by the Rostislavichi. The body of Yaropolk was transferred to Kiev and on 5 December was buried in the church of Saint Peter, which he himself had begun to build. Many Church memorials, beginning with the Chronicle of the Monk Nestor, testify, that the murdered nobleborn prince Yaropolk be venerated in the rank of Saints well-pleasing to God.