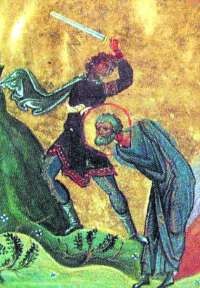 The Holy Martyr Dasios lived during the III Century in the city of Dorostolum on the Dunaj/Danube River. The inhabitants of the city were preparing for a feast in honour of the pagan god Saturn. By custom, 30 days before the feast they selected an handsome youth, dressed him in fine clothing, accorded him royal honours, and on the day of the feast brought him in sacrifice to their god. The choice of his compatriots fell upon Saint Dasios, since in the city there was not a more handsome youth. Having learned of this, the saint said: "If I am fated to die, then better to die for Christ as a Christian". He openly confessed his faith in Christ in front of his fellow citizens. He denounced their impiety and error and converted many of them to Christ. For this, on orders of the emperors Diocletian (284-305) and Maximian (284-305), he was beheaded after cruel tortures.