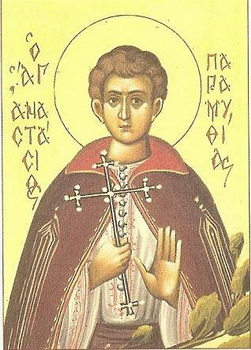 Anastasius and his sister were Greek peasants living in Epirus under Ottoman rule. One day a band of Turks came through their village, led by Musa, the son of the local Pasha (Governor). Musa was struck by the beauty of Anastasius' sister and tried to seize her, but Anastasius threw himself at the Turks and fought them off long enough for his sister to escape. Musa's father had Anastasius arrested and brought before him and, impressed by his courage, attempted to convert him to Islam by many means: threats, beatings, and offers of worldly honor; but Anastasius held firm and was cast into prison.
Musa was moved by the way that Anastasius bore all these trials and temptations, and wanted to know more about the Faith that sustained him. Going secretly to Anastasius' prison cell, he peered in and saw two young men of shining appearance with the prisoner. They vanished as soon as Musa entered. Anastasius told Musa that these were angels who guard and aid every Christian, especially when they suffer for Christ. He also explained in a simple way the Gospel of Jesus Christ, which enables His followers to set little value upon worldly things. Musa, deeply moved, threw himself at Anastasius' feet and asked to become a Christian. Anastasius told him to wait until the proper time, because his conversion would cause his father to persecute all the Christians under his power. A few days later, in 1750, Anastasius was beheaded by order of the Pasha.
Soon after this, Musa visited the tomb of a holy Martyr and was granted a vision of Anastasius, who appeared to him encircled in light and urged him to continue on the road to Christ. Musa fled his father's domain to the Peleponnese where he received direction in the Faith from an aged ascetic. He then traveled to Venice to be baptized without fear of reprisal by the Turks. In time he became a monk on Corfu, receiving the monastic name of Daniel. He lived there in asceticism, but the desire grew in him to taste martyrdom for Christ, so he traveled to Constantinople to declare his conversion to the Muslims. But the Christians there dissuaded him, knowing that the conversion of such a prominent Turk would, if it were known, lead to retaliation against Christians. Saint Daniel returned to Corfu, where he founded a church in honor of St Anastasius and reposed in peace.