Martyrs Zacchaeus the Deacon and Alphaeus, of Caesarea in Palestine (303) 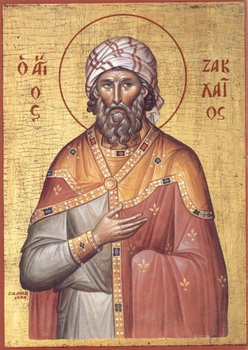 The Holy Martyrs Zaccheios, Deacon of Gadara, and Alpheios, Reader of Caesarea, suffered under the emperor Diocletian (284-305). During the time of the then most fierce persecution against Christians, among many others arrested was Saint Zaccheios, a deacon of the Gadara church, who openly confessed his faith and under torture did not renounce Christ. The Diocletian persecution was so fierce, that many did not endure, and frightened of the tortures, consented to offer sacrifice to the pagan gods. Saint Alpheios, a reader of the Caesarea church, zealous for the glory of God, approached the crowd of those fallen away from Christ, on their way to offer pagan sacrifice. He urged them not to defile themselves with the impious sacrifices. They arrested Saint Alpheios and after tortures and torments they shackled him together with Saint Zaccheios. They threw the martyrs for the night into prison, where they prayed continually, supporting one another in their resolve to endure all the sufferings for the Name of Christ and thereby gain eternal life. In the morning the holy Martyrs Zaccheios and Alpheios were beheaded (+ 303).