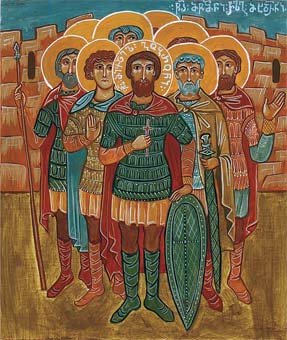 In the year 914 a certain prince by the name of Michael-Gobron distinguished himself in a battle against the Arab Muslim invaders. After they had captured the fortress of Kvelistsikhe in southern Georgia, the Muslims took captive those who remained alive, and Prince Gobron was among them. Deeply impressed by the Georgian soldier’s valor, the emir Abu al-Qasim ordered his army to treat him with respect.
King Adarnerse sent Abu al-Qasim a large sum of money as a ransom for his people, and some were released. Gobron, however, was not among them. The Georgian prince recognized clearly what the future would bring, and he prepared to be martyred for Christ’s sake. The Saracens escorted Gobron and 133 Georgian soldiers to their execution.
Abu al-Qasim tempted the faithful prince by offering him earthly glory and honor in exchange for his renunciation of the Christian Faith. But St. Gobron firmly declined all of his offers. Then the furious Abu al-Qasim ordered that he be taken into the yard and shown his fallen countrymen on one side and the promised wealth on the other.
When the emir cunningly asked which one he would choose, Gobron answered, “I told you from the very start that I will not retreat from Christ my Lord!”
Then the emir devised a new, more cruel trial: “He knows not the grief of death. Lead him outside and execute every living Christian before his eyes!” he commanded.
They led the saint out in the midst of his brothers and proceeded to slaughter every one of them. The blood of the dead flew around Gobron in every direction, and the martyrs’ limp bodies collapsed at his feet, but none of these horrors could break his will.
Then they compelled him to bow his head and brandished their swords above him two times. Prince Gobron traced a cross on his brow with blood and said, “I thank Thee, Lord Jesus Christ, that Thou hast accounted me, the most contemptible and chief among sinners, worthy to lay down my life for Thy sake!”
Again they brought St. Gobron before the emir. For the last time Abu al-Qasim tried to entice him to apostatize, but the saint, dripping with blood, declared, “Do as you wish. I am a Christian and will never retreat from the name of my Christ!”
Having lost all patience, Abu al-Qasim ordered that St. Gobron’s head be chopped off and thrown in with the other mutilated bodies. Then they dug three large holes, tossed in the relics of the martyrs, refilled the holes with earth, and forbade all Christians to approach that place. At night the graves shone with a divine light visible to believers and unbelievers alike.
For laying down their lives for Christ, the valorous prince Michael-Gobron and the 133 martyrs were numbered among the saints by the Georgian Apostolic Church. The day of their commemoration was designated as November 17, the day of their martyrdom.