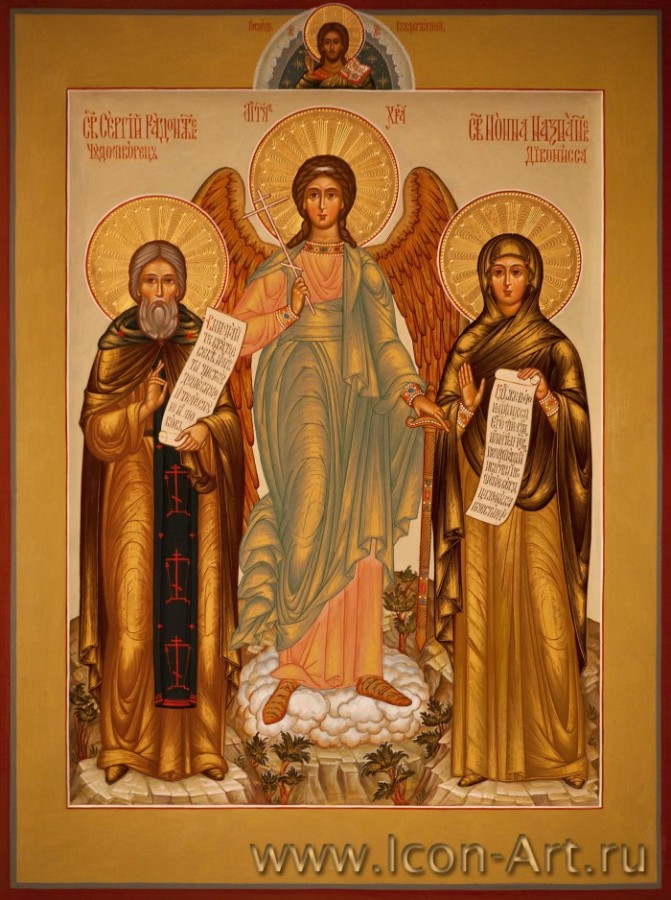 Saint Nonna, the mother of St Gregory the Theologian (January 25, 389), was the daughter of Christians named Philotatos and Gorgonia, who raised her in Christian piety. St Nonna was also an aunt of St Amphilochius, Bishop of Iconium (November 23).

St Nonna entered into marriage with Gregory of Arianzus (January 1), the rich landowner of an estate in the Arianzus and Nazianzos districts. The marriage was advantageous by earthly considerations, but grievous for the pious soul of Nonna. Her husband Gregory was a pagan, a follower of the sect of the Supremists (Hypsistarii), who venerated a supreme god and observed certain Jewish rituals, while at the same time they worshipped fire.

St Nonna prayed that her spouse would turn to the holy truth. St Nonna's son, St Gregory the Theologian, wrote about this: "She could not bear this, being half united to God, because he who was part of her remained apart from God. She wanted a spiritual union in addition to the bodily union. Day and night she turned to God with fasting and many tears, entreating Him to grant salvation to her husband."

Through the prayers of St Nonna, her husband Gregory had a vision in his sleep. "It seemed to my father," writes St Gregory, "as though he was singing the following verse of David: 'I was glad when they said to me, let us go into the house of the Lord' (Ps. 121/122: 1). He had never done this before, though his wife had often offered her supplications and prayers for it."

The Psalm was strange to him, but along with its words, the desire also came to him to go to church. When she heard about this, St Nonna told her husband that the vision would bring the greatest pleasure if it were fulfilled.

The elder Gregory went to the First Ecumenical Council at Nicea, where he made known his conversion to Christ. He was baptized, ordained presbyter, and then Bishop of Nazianzos devoting himself totally to the Church. At the same time as his consecration as bishop, his wife St Nonna was made a deaconness. With the same zeal with which she had raised her children, she now occupied herself in performing works of charity.

"She knew," says St Gregory the Theologian, "one thing to be truly noble: to be pious and to know from where we have come and where we are going; and that there is one innate and trusty wealth: to use one's substance on God and on the poor, especially the impoverished kin.

One woman may be distinguished for frugality, and another for piety, while she, difficult as it is to combine both qualities, excelled all others in both of them. In each she attained the height of perfection, and both were combined in her. She did not permit one duty to interfere with the other, but rather each supported the other.

What time and place of prayer ever eluded her? She was drawn to this each day before anything else, and she had complete faith that her prayers would be answered. Although greatly moved by the sorrows of strangers, she never yielded to grief to the extent that she allowed any sound of woe to escape her lips before the Eucharist, or a tear to fall from her eye, or for any trace of mourning to remain on a Feast day, though she repeatedly endured many sorrows. She subjected every human thing to God.

Her final years brought St Nonna many sorrows. In the year 368 her younger son Caesarios died, a young man of brilliant expectations; and in the following year, her daughter died. The brave old woman bore these losses submitting to the will of God.

In the year 370 Bishop Gregory, then already an old man, participated in the consecration of St Basil the Great as Bishop of Caesarea. St Nonna, who was somewhat younger than her husband, was also ready to enter into the next life, but through the prayers of her beloved son her time on earth was prolonged.

"My mother," wrote her son, " was always strong and vigorous, and free from sickness all her life, but then she became ill. Because of much distress... caused by her inability to eat, her life was in danger for many days, and no cure could be found. How then did God sustain her? He did not send down manna, as for Israel of old; He did not split open a rock, in order to provide water for the thirsty people; not did He send food by ravens, as with Elias, nor did He feed her..., as He once fed Daniel, who felt hunger in the pit. But how?"

It seemed to her that I, her favorite son (not even in dreams did she prefer anyone else), had appeared to her suddenly by night with a basket of the whitest bread. Then I blessed these loaves with the Sign of the Cross, as is my custom, and I gave her to eat, and with this her strength increased."

St Nonna believed the vision was real. She became stronger, and more like her old self.

St Gregory visited her early the next morning and, as usual, asked what sort of night she had, and if she required anything. She replied, "My son, you have fed me and now you ask about my health. I am well." At this moment her maids made signs to me that I should not contradict her, but to accept her words so that the actual truth should not distress her."

Early in the year 374 the hundred-year-old St Gregory the Elder reposed. After this, St Nonna almost never emerged from the church. Soon after his death, she died at prayer in the temple on August 5, 374.

St Nonna was a model wife and mother, a remarkable woman who devoted her life to God and the Church without neglecting her other responsibilities. Because of her spiritual, social, and domestic concerns, St Nonna would be a most fitting patron for Orthodox women's organizations.