Blessed Maxim, Fool-for-Christ, lived at Moscow. About his parentage, time and place of birth, nothing is known. Saint Maxim chose one of the most difficult and thorny paths to salvation, voluntarily for the sake of Christ having taken upon himself the guise of a fool. Summer and winter Maxim walked about almost naked, bearing with prayer both the heat and cold. He had a saying: "Fierce though be the winter, yet sweet be paradise". Rus' very much loved its holy fools, it esteemed their deep humility, it heeded their wisdom, expressed profitably and aphoristically in the proverbial sayings of the people's language. And everyone heeded the holy fools: everyone from the great princes on down to the least beggar.
Blessed Maxim lived at a difficult time for the Russian people. Tatar incursions, droughts, epidemics were endemic and people perished. The saint said to the unfortunate: "Not everything is by the weave of the wool, some be opposite... They have won the fight, admit it, and bow the lower; weep not for the beaten, weep rather the unbeaten; let us show tolerance and in this we shalt at least be human; gradually even raw firewood ignites; for toleration may God grant salvation". But the saint did not only speak words of consolation. His angry denunciations frightened the mighty of his world. Blessed Maxim was wont to say to the rich and illustrious: "An idolatrous house, and a conscience corrupted; everyone is baptised, let everyone pray; God doth detect every wrong. He deceiveth not thee, nor deceivest thou He".
Blessed Maxim died on 11 November 1434 and as buried at the church of the holy Princes Boris and Gleb. Miraculous healings began occurring from the relics of the saint of God. In a circular missive of 1547, metropolitan Makarii enjoined "the singing and celebration at Moscow to the new Wonderworker Maxim, Fool-for-Christ". That same year on 13 August the relics of Blessed Maxim were uncovered undecayed. The church of Saints Boris and Gleb, at which the saint was buried, burned in the year 1568. On its place was built a new church, which they consecrated in the name of Saint Maxim, Fool-for-Christ. And into this church was put the venerable relics of Saint Maxim. 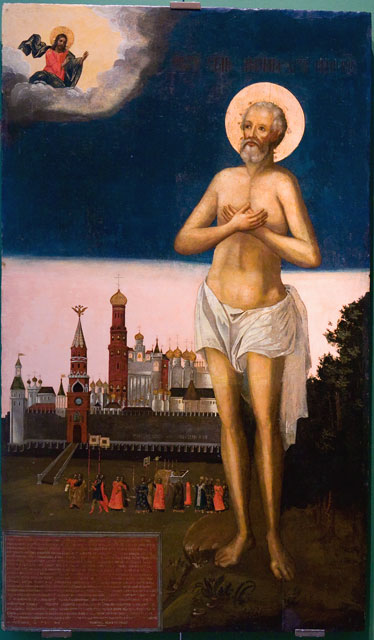