The Hieromartyr Stephen, Pope of Rome and others with him 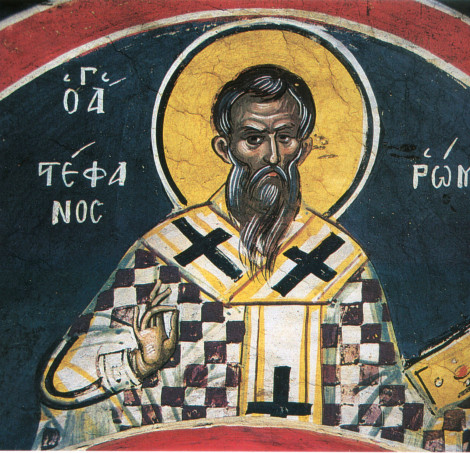 The Hieromartyr Stephen, Pope of Rome, suffered in the year 257 during the reign of the emperor Valerian (253-259). St Stephen, occupying the throne (253-257) of the holy First Bishop of Rome, zealously contended against the heresy of Novatus, which taught that it is not proper to receive back those returning from heresy.

While hiding during a persecution against Christians, St Stephen baptized many pagans, including the military tribune Nemesius. He converted to Christ after the saint healed his daughter Lucilla. Nemesius, who was ordained as a deacon, was beheaded along with his daughter.

Their steward Symphronius was brought by the tribune Olympius into the temple of Mars for torture. His prayer shattered the golden idol, after which the tribune with his wife Exuperia and his son Theodolus believed and were baptized. They were all burned alive, and their remains were buried by holy Pope Stephen.

Then twelve of his clergy were beheaded: Bonus, Faustus, Maurus, Primitivus, Calumniosus, John, Exuperantus, Cyril, Theodore, Basil, Castelus, Honoratus and Tertullinus, all converted by St Stephen. Finally, St Stephen himself was led before the emperor Valerian (253-259) , who condemned him to beheading with a sword in the temple of Mars.

By the prayers of the saint, a large part of the pagan temple was destroyed, and the soldiers fled. The saint concealed himself in the catacombs (the resting place of Saint Lucina or Lucy), where he was later killed by soldiers while he was teaching Christians.