The Seven Maccabees, their Mother Solomonia and Eleazar the Priest 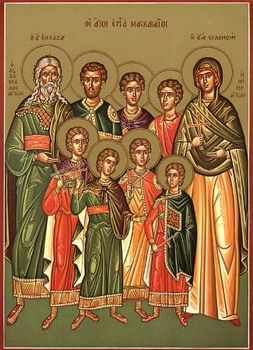 The seven holy Maccabee martyrs Abim, Antonius, Gurias, Eleazar, Eusebonus, Alimus and Marcellus, their mother Solomonia and their teacher Eleazar suffered in the year 166 before Christ under the impious Syrian king Antiochus IV Epiphanes. This foolish ruler loved pagan and Hellenistic customs, and held Jewish customs in contempt. He did everything possible to turn people from the Law of Moses and from their covenant with God. He desecrated the Temple of the Lord, placed a statue of the pagan god Zeus there, and forced the Jews to worship it. Many people abandoned the God of Abraham, Isaac, and Jacob, but there were also those who continued to believe that the Savior would come.

A ninety-year-old elder, the scribe and teacher Eleazar, was brought to trial for his faithfulness to the Mosaic Law. He suffered tortures and died at Jerusalem.

The disciples of St Eleazar, the seven Maccabee brothers and their mother Solomonia, also displayed great courage. They were brought to trial in Antioch by King Antiochus Epiphanes. They fearlessly acknowledged themselves as followers of the True God, and refused to eat pig's flesh, which was forbidden by the Law.

The eldest brother acted as spokesmen for the rest, saying that they preferred to die rather than break the Law. He was subjected to fierce tortures in sight of his brothers and their mother. His tongue was cut out, he was scalped, and his hands and feet were cut off. Then a cauldron and a large frying pan were heated, and the first brother was thrown into the frying pan, and he died.

The next five brothers were tortured one after the other. The seventh and youngest brother was the last one left alive. Antiochus suggested to St Solomonia to persuade the boy to obey him, so that her last son at least would be spared. Instead, the brave mother told him to imitate the courage of his brothers.

The child upbraided the king and was tortured even more cruelly than his brothers had been. After all her seven children had died, St Solomonia, stood over their bodies, raised up her hands in prayer to God and died.

The martyric death of the Maccabee brothers inspired Judas Maccabeus, and he led a revolt against Antiochus Epiphanes. With God's help, he gained the victory, and then purified the Temple at Jerusalem. He also threw down the altars which the pagans had set up in the streets. All these events are related in the Second Book of Maccabees (Ch. 8-10).

Let us praise the seven Maccabees,
with their mother Salome and their teacher Eleazar;
they were splendid in lawful contest
as guardians of the teachings of the Law.
Now as Christ's holy martyrs they ceaselessly intercede for the world.

Seven pillars of the Wisdom of God
and seven lampstands of the divine Light,
all-wise Maccabees, greatest of the martyrs before the time of the martyrs,
with them ask the God of all to save those who honor you.