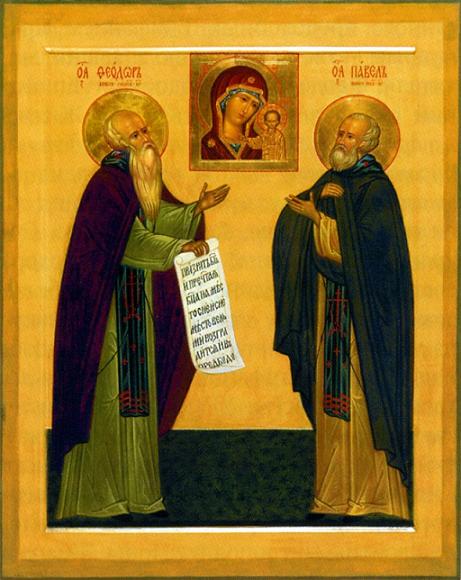 The Monks Theodore (Feodor) and Paul of Rostov in the XIV Century founded at the River Ust', not far from Rostov, a monastery in honour of the holy Martyrs Boris and Gleb (+ 1015, Comm. 2 May).The Monk Theodore came first to the place of the future monastery, from the Novgorod region. The Monk Paul came three years later for ascetic exploits.
In 1363 the Monk Sergei of Radonezh (Comm. 25 September and 5 July) came to Rostov, his native region. Learning of this, the Monks Theodore and Paul set off thither and came to the great ascetic for spiritual counsel. The Monk Sergei visited their wilderness monastery, and having pointed out the place, he gave blessing to build there a church in the name of the holy Passion-Bearers Boris and Gleb. Already during the time of construction of this first church, monks began gathering to the ascetics. The hegumen, the Monk Theodore, joyfully accepted all that came. Soon a second temple was built, in honour of the Annunciation of the MostHoly Mother of God.
Having set in order the Borisoglebsk monastery, the Monk Theodore entrusted its direction to the Monk Paul, and then he himself with several disciples withdrew into the Vologda forest. Here at Beloe-Ozero (White-Lake), nigh to the confluence of the River Kouzha into it, he founded a monastery and asceticised there for several years. Having built a church in the name of Saint Nicholas and setting in order the monastery, he established an hegumen for it. And having received a revelation about his impending end, he returned to the Borisoglebsk monastery, where he died on 22 October 1409. The Monk Paul directed the two monasteries for a certain while, and he died at this same monastery.