The Procession of the Precious Cross 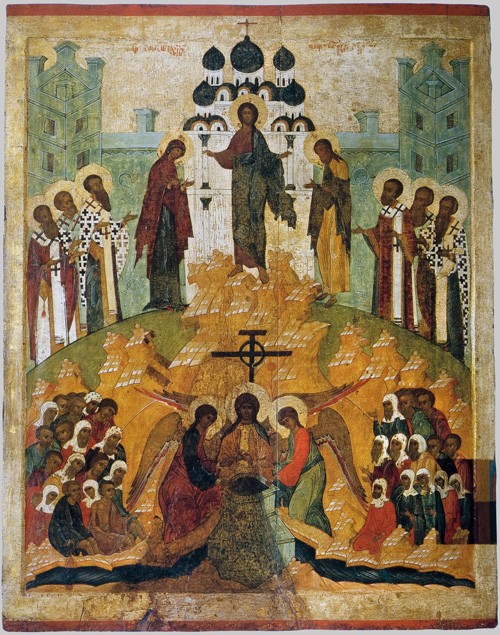 The Procession of the Venerable Wood of the Life-Creating Cross of the Lord: In the Greek Horologion of 1897 the derivation of this Feast is explained: "Because of the illnesses that occur in August, it was customary, in former times, to carry the Venerable Wood of the Cross through the streets and squares of Constantinople for the sanctification of the city, and for relief from sickness. On the eve (July 31), it was taken out of the imperial treasury, and laid upon the altar of the Great Church of Hagia Sophia (the Wisdom of God). From this Feast until the Dormition of the Most Holy Theotokos, they carried the Cross throughout the city in procession, offering it to the people to venerate. This also is the Procession of the Venerable Cross."

In the Russian Church this Feast is combined also with the remembrance of the Baptism of Rus, on August 1, 988. In the "Account of the Order of Services in the Holy, Catholic and Apostolic Great Church of the Dormition," compiled in 1627 by order of Patriarch Philaret of Moscow and All Rus, there is the following explanation of the Feast: "On the day of the Procession of the Venerable Cross there is a church procession for the sanctification of water and for the enlightenment of the people, throughout all the towns and places."

Knowledge of the day of the actual Baptism of Rus was preserved in the Chronicles of the sixteenth century: "The Baptism of the Great Prince Vladimir of Kiev and all Rus was on August 1."

In the present practice of the Russian Church, the Lesser Sanctification of Water on August 1 is done either before or after Liturgy. Because of the Blessing of Water, this first Feast of the Savior in August is sometimes called 'Savior of the Water." There may also be a Blessing of New Honey today, which is why the Feast is also called "Savior of the Honey." From this day the newly gathered honey is blessed and tasted.

O Lord, save Your people,
And bless Your inheritance!
Grant victories to the Orthodox Christians
Over their adversaries.
And by virtue of the Cross,
Preserve Your habitation!

As You were voluntarily crucified for our sake,
Grant mercy to those who are called by Your name;
Make all Orthodox Christians glad by Your power,
Granting them victories over their adversaries,
By bestowing on them the invincible trophy, Your weapon of peace!