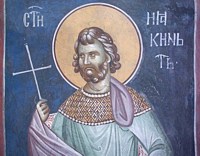 The Holy Martyr Iacynthos (Hyacinthe) (IV) was born into a pious Christian family in the city of Amastridea (now Amastra in Anatolia). An Angel which appeared gave him his name. As a three year old boy Saint Iacynthos besought of God that a dead infant might be resurrected, and the Lord hearkened to his childish prayer: the dead one arose. Both lads afterwards grew up together, and together they asceticised in virtuous life. Saint Iacynthos once noticed, how the pagans were worshipping a tree, and so he chopped it down. For this they subjected him to harsh tortures. They smashed out all his teeth, and having bound him with rope, they dragged him along the ground and threw him in prison. And it was there that the holy sufferer expired to God.