Our Holy Father Moses the Ugrian 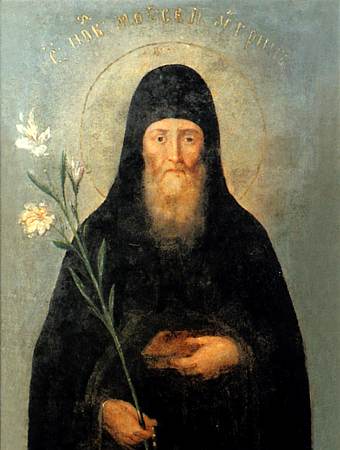 Saint Moses the Hungarian of the Caves, was a brother of St Ephraim of Novy Torg (January 28), and of St George. Together with them he entered into the service of the holy Prince Boris (July 24). After the murder of St Boris in 1015 at the River Alta (St George also perished with him), St Moses fled and hid himself at Kiev with Predislava, sister of prince Yaroslav. In 1018, when the Polish king Boleslav seized Kiev, St Moses and his companions wound up in Poland as captives.

Tall and handsome, St Moses attracted the attention of a certain rich Polish widow, who burned with a passionate desire for him and wanted to ransom him from captivity and make him her husband. St Moses resolutely refused to exchange captivity for slavery to a wife. Despite his refusal, the Polish woman bought the captive.

She did everything in her power to seduce the youth, but he preferred hunger pains to banquets of food. Then the Polish woman began to convey St Moses through her lands, thinking to captivate him by power and riches. St Moses told her that he would not trade spiritual riches for the perishable things of this world, and that he wished to become a monk.

Passing through the area, an Athonite hieromonk tonsured St Moses a monk. The Polish woman gave orders to stretch St Moses on the ground and to beat him with iron rods, so that the ground became soaked with his blood. She sought permission of Boleslav to do with the captive all that she pleased. The shameless woman once gave orders to put St Moses in a bed with her. She kissed and embraced him, but she accomplished nothing by this.

St Moses said, "From the fear of God I loathe you as impure". Hearing this, the Polish woman gave orders to give the saint each day a hundred lashes, and then to emasculate him. Boleslav soon began a persecution against all the monks in the land, but sudden death overtook him. A revolt arose in Poland, in which the widow also was killed.

Having recovered from his wounds, St Moses arrived at the Kiev Caves monastery, bearing on himself martyr's wounds and a crown of a confessor and courageous warrior of Christ. The Lord provided him strength in his sufferings. A certain monastic brother, oppressed by impure passion, went to St Moses and sought his help, saying, "I promise to keep until death everything you tell me to do." St Moses said: "As long as you live, do not speak a word to any woman." The brother promised to obey the advice of the monk. St Moses had in his hand a staff, without which he was not able to walk because of the wounds which he had received. With this staff St Moses struck the chest of the brother who had approached him, and immediately he was delivered from temptation.

St Moses pursued asceticism at Kiev for 10 years; he died in about the year 1043 and was buried in the Near Caves. After venerating the saint's holy relics and fervent prayer to him, the monks were healed of fleshly temptations.