Our Holy Mother, the Martyr Paraskeva 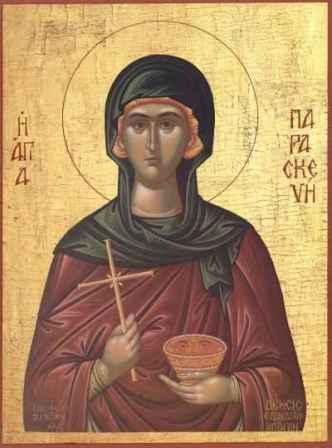 Holy Virgin Martyr Paraskeva of Rome was the only daughter of Christian parents, Agathon and Politia, and from her early years she dedicated herself to God. She spent much of her time in prayer and the study of the Holy Scriptures. After the death of her parents St Paraskeva distributed all of her inheritance to the poor, and consecrated her virginity to Christ. Emulating the holy Apostles, she began to preach to the pagans about Christ, converting many to Christianity.

She was arrested during the reign of Antoninus Pius (138-161) because she refused to worship the idols. She was brought to trial and fearlessly confessed herself a Christian. Neither enticements of honors and material possessions, nor threats of torture and death shook the firmness of the saint nor turned her from Christ. She was given over to beastly tortures. They put a red-hot helmet on her head and threw her in a cauldron filled with boiling oil and pitch. By the power of God the holy martyr remained unharmed. When the emperor peered into the cauldron, St Paraskeva threw a drop of the hot liquid in his face, and he was burned. The emperor began to ask her for help, and the holy martyr healed him. After this the emperor set her free.

Traveling from one place to another to preach the Gospel, St Paraskeva arrived in a city where the governor was named Asclepius. Here again they tried the saint and sentenced her to death. They took her to an immense serpent living in a cave, so that it would devour her. But St Paraskeva made the Sign of the Cross over the snake and it died. Asclepius and the citizens witnessed this miracle and believed in Christ. She was set free, and continued her preaching. In a city where the governor was a certain Tarasius, St Paraskeva endured fierce tortures and was beheaded in the year 140.

Many miracles took place at the saint's tomb: the blind received sight, the lame walked, and barren women gave birth to children. It is not only in the past that the saint performed her miracles, but even today she helps those who call on her in faith.

Wise and praiseworthy martyr of Christ Parasceva:
By accepting courage and rejecting feminine weakness
You conquered the devil!
You put your torturer to shame by crying out:
Come, rend my body with your sword and burn it with fire,
For I go rejoicing to Christ my bridegroom!
By her prayers, O Christ God, save our souls!

Come, O faithful, and with one accord let us sing a special hymn to Parasceva!
Triumphant in her fight she shines as a brilliant star above the world;
Expelling the darkness of error, she pours down grace upon the faithful.
Therefore, let us cry out to her: Rejoice, O Victorious Martyr!