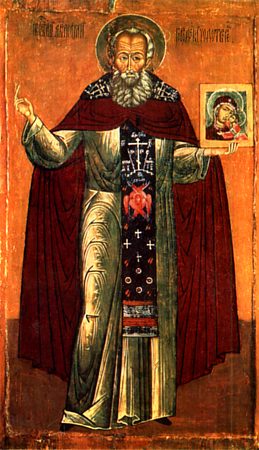 The Monk Avraam (Abraham) of Galich, Chuklomsk, lived and pursued asceticism at the monastery of the Monk Sergei of Radonezh during the XIV Century. After long years of novitiate he was deemed worthy of the priestly dignity. Yearning after the perfection of silence, he petitioned the blessing of the Monk Sergei and in the year 1350 settled in the Galich countryside, settled by foreign tribes of people. Having settled in a place of wilderness, the Monk Avraam through a revelation went up upon a mountain, where he found an icon of the Mother of God shining with an indescribable light. The appearance of the holy icon became known to the Galich prince Dimitrii, who entreated the monk to bring it to the city. The Monk Avraam came with the icon to Galich, where he was met by the prince and a throng of clergy. Numerous healings were worked from the icon of the Mother of God. Prince Dimitrii bestowed upon the monk the means for construction of a church and monastery near Chukhlomsk Lake, at the place of the appearance of the icon of the MostHoly Mother of God. The church was built and dedicated in honour of the Dormition [Uspenie] of the MostHoly Mother of God. The newly built monastery of the Monk Avraam became a source of spiritual enlightenment for the local foreign peoples. When the monastery was built up, he established in his place as head his student Porphyrii, and he himself withdrew 30 versts away in search of a solitary place, but there also disciples found him. Thus rose up still another monastery with a temple in honour of the Placing of the Robe of the Mother of God, called "the great Avraamite wilderness-monastery". The Monk Avraam twice withdrew off to a quiet place, after which there gathered about him anew the disquieters. Thus were founded two more monasteries – one in honour of the Sobor (Assemblage) of the MostHoly Mother of God, the hegumen of which the Monk Avraam made Porphyrii; and the other – in honour of the Protection [Pokrov] of the MostHoly Mother of God, where the Monk Avraam finished his earthly life. He died in 1375, having the year before his blessed end given over the governance to his disciple Innokentii. The Monk Avraam was an enlightener of the Galich land, having founded in it four monasteries dedicated to the Mother of God, granting him Her icon at the beginning of his prayerful exploits.