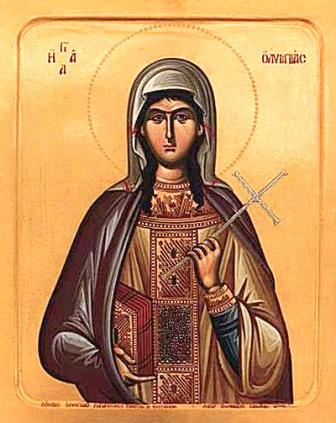 Saint Olympias the Deaconess was the daughter of the senator Anicius Secundus, and by her mother she was the granddaughter of the noted eparch Eulalios (he is mentioned in the life of St Nicholas). Before her marriage to Anicius Secundus, Olympias's mother had been married to the Armenian emperor Arsak and became widowed. When St Olympias was still very young, her parents betrothed her to a nobleman. The marriage was supposed to take place when St Olympias reached the age of maturity. The bridegroom soon died, however, and St Olympias did not wish to enter into another marriage, preferring a life of virginity.

After the death of her parents she became the heir to great wealth, which she began to distribute to all the needy: the poor, the orphaned and the widowed. She also gave generously to the churches, monasteries, hospices and shelters for the downtrodden and the homeless.

Holy Patriarch Nectarius (381-397) appointed St Olympias as a deaconess. The saint fulfilled her service honorably and without reproach.

St Olympias provided great assistance to hierarchs coming to Constantinople: Amphilochius, Bishop of Iconium, Onesimus of Pontum, Gregory the Theologian, St Basil the Great's brother Peter of Sebaste, Epiphanius of Cyprus, and she attended to them all with great love. She did not regard her wealth as her own but rather God's, and she distributed not only to good people, but also to their enemies.

St John Chrysostom (November 13) had high regard for St Olympias, and he showed her good will and spiritual love. When this holy hierarch was unjustly banished, St Olympias and the other deaconesses were deeply upset. Leaving the church for the last time, St John Chrysostom called out to St Olympias and the other deaconesses Pentadia, Proklia and Salbina. He said that the matters incited against him would come to an end, but scarcely more would they see him. He asked them not to abandon the Church, but to continue serving it under his successor. The holy women, shedding tears, fell down before the saint.

Patriarch Theophilus of Alexandria (385-412), had repeatedly benefited from the generosity of St Olympias, but turned against her for her devotion to St John Chrysostom. She had also taken in and fed monks, arriving in Constantinople, whom Patriarch Theophilus had banished from the Egyptian desert. He levelled unrighteous accusations against her and attempted to cast doubt on her holy life.

After the banishment of St John Chrysostom, someone set fire to a large church, and after this a large part of the city burned down.

All the supporters of St John Chrysostom came under suspicion of arson, and they were summoned for interrogation. They summoned St Olympias to trial, rigorously interrogating her. They fined her a large sum of money for the crime of arson, despite her innocence and a lack of evidence against her. After this the saint left Constantinople and set out to Kyzikos (on the Sea of Marmara). But her enemies did not cease their persecution. In the year 405 they sentenced her to prison at Nicomedia, where the saint underwent much grief and deprivation. St John Chrysostom wrote to her from his exile, consoling her in her sorrow. In the year 409 St Olympias entered into eternal rest.

St Olympias appeared in a dream to the Bishop of Nicomedia and commanded that her body be placed in a wooden coffin and cast into the sea. "Wherever the waves carry the coffin, there let my body be buried," said the saint. The coffin was brought by the waves to a place named Brokthoi near Constantinople. The inhabitants, informed of this by God, took the holy relics of St Olympias and placed them in the church of the holy Apostle Thomas.

Afterwards, during an invasion of enemies, the church was burned, but the relics were preserved. Under the Patriarch Sergius (610-638), they were transferred to Constantinople and put in the women's monastery founded by St Olympias. Miracles and healings occurred from her relics.