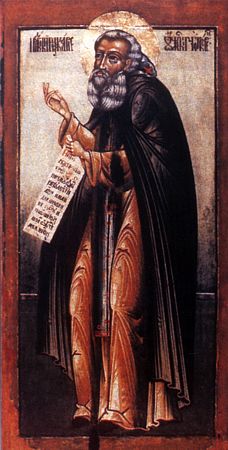 The Monk Makarii of Zheltovodsk and Unzhensk was born in the year 1349 at Nizhni-Novgorod into a pious family. At twelve years of age he secretly left his parents and accepted monastic tonsure at the Nizhegorodsk Pechersk monastery under Saint Dionysii (afterwards Archbishop of Suzdal'; + 1385, Comm. 26 June). With all the intensity of his youthful soul he gave himself over to the work of salvation: extremely strict fasting and exact fulfilling of the monastic rule distinguished him amongst the brethren.
The parents of the Monk Makarii only learned three years later where he had taken himself off to. His father went to him and tearfully besought his son merely that he would come forth and show himself. The Monk Makarii conversed with his father through a wall and said, that he would see him in the future life. "Extend me at least thine hand," – implored the father. The son fulfilled this small request and the father, having kissed the extended hand of his son, returned home. Burdened by fame, the humble Makarii set out to the shores of the River Volga and here he pursued asceticism near the waters of Lake Zhelta. Here by firm determination and patience he overcame the abuse of the enemy of salvation. Lovers of solitude gathered to the Monk Makarii, and in 1435 he organised for them a monastery in the Name of the MostHoly Trinity. Here also he began to preach Christianity to the surrounding Cheremis and Chuvash peoples, and he baptised both Mahometans and pagans in the lake, which received its name from the saint. When the Kazan Tatars destroyed the monastery in 1439, they took captive the Monk Makarii. Out of respect for his piety and charitable love, the khan released the saint from captivity and set free together with him nearly 400 Christians. But in return they accepted the word of the Monk Makarii not to settle by Lake Zhelta. The Monk Makarii reverently buried those killed at his monastery, and he set out 200 versts to the Galich border. During the time of this resettlement all those on the way were fed in miraculous manner through the prayers of the monk. Having arrived at the city of Unzha, the Monk Makarii 15 versts from the city set up a cross and built a cell on the shores of Lake Unzha. And here he founded a new monastery. During the fifth year of his life at Lake Unzha the Monk Makarii took sick and reposed at age 95.
While yet alive, the Monk Makarii was granted a graced gift: he healed a blind and demon-afflicted girl. After the death of the monk, many received healing from his relics. The monks erected over his grave a temple and established a life-in-common rule at the monastery. In 1522 Tatars fell upon Unzha and wanted to tear apart the silver reliquary in the Makariev monastery, but they fell blind, and in a panic they took to flight. Many of them drowned in the Unzha. In 1532, through the prayers of the Monk Makarii, the city of Soligalich was saved from the Tatars, and in gratitude the inhabitants built a chapel in the cathedral church in honour of the saint. More than 50 people received healing from grievous infirmities through the prayers of the Monk Makarii, – this was certified to by a commission, dispatched by Patriarch Philaret in 1619.