Commemoration of the Fifth Ecumenical Council 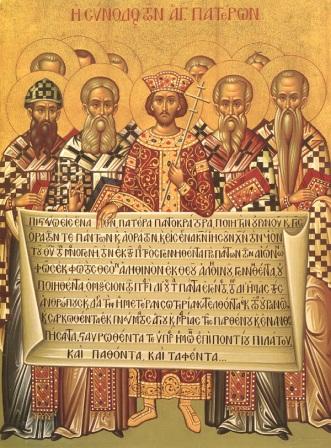 The Fifth Ecumenical Council (Constantinople II) was held at Constantinople, under the holy Emperor St Justinian I (527-565) in the year 553, to determine the Orthodoxy of three dead bishops: Theodore of Mopsuetia, Theodoret of Cyrrhus and Ibas of Edessa, who had expressed Nestorian opinions in their writings in the time of the Third Ecumenical Council (September 9).

These three bishops had not been condemned at the Fourth Ecumenical Council (July 16), which condemned the Monophysites, and in turn had been accused by the Monophysites of Nestorianism. Therefore, to deprive the Monophysites of the possibility of accusing the Orthodox of sympathy for Nestorianism, and also to dispose the heretical party towards unity with the followers of the Council of Chalcedon, the emperor St Justinian issued an edict. In it "the Three Chapters" (the three deceased bishops) were condemned. But since the edict was issued on the emperor's initiative, and since it was not acknowledged by representatives of all the Church (particularly in the West, and in Africa), a dispute arose about the "Three Chapters." The Fifth Ecumenical Council was convened to resolve this dispute.

165 bishops attended this Council. Pope Vigilius, though present in Constantinople, refused to participate in the Council, although he was asked three times to do so by official deputies in the name of the gathered bishops and the Emperor himself. The Council opened with St Eutychius, Patriarch of Constantinople (552-565, 577-582), presiding. In accordance with the imperial edict, the matter of the "Three Chapters" was carefully examined in eight prolonged sessions from May 4 to June 2, 553.

Anathema was pronounced against the person and teachings of Theodore of Mopsuetia. In the case of Theodore and Ibas, the condemnations were confined only to certain of their writings, while they personally had been cleared by the Council of Chalcedon, because of their repentance. Thus, they were spared from the anathema.

This measure was necessary because certain of the proscribed works contained expressions used by the Nestorians to interpret the definitions of the Council of Chalcedon for their own ends. But the leniency of the Fathers of the Fifth Ecumenical Council, in a spirit of moderate economy regarding the persons of Bishops Theodore and Ibas, instead embittered the Monophysites against the decisions of the Council. Besides which, the emperor had given the orders to promulgate the Conciliar decisions together with a decree of excommunication against Pope Vigilius, for being like-minded with the heretics. The Pope afterwards concurred with the mind of the Fathers, and signed the Conciliar definition. The bishops of Istria and all the region of the Aquilea metropolia, however, remained in schism for more than a century.

At the Council the Fathers likewise examined the errors of presbyter Origen, a renowned Church teacher of the third century. His teaching about the pre-existence of the human soul was condemned. Other heretics, who did not admit the universal resurrection of the dead, were also condemned.

It pleased the Lord that the Holy Spirit should inspire the Fathers of the Council in a further definition of Orthodoxy that preserves the integrity and dignity both of God and of mankind, without the distortion of either that occurs within the Nestorian or Monophysite heresies.