Our Holy Mother Eupraxia the Virgin 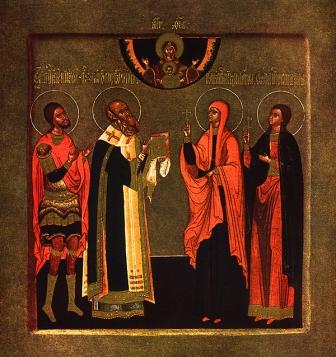 Saint Eupraxia was daughter of the Constantinople dignitary Antigonos, a kinsman of the holy Emperor Theodosius the Great (379-395).

Antigonus and his wife Eupraxia were pious and bestowed generous alms on the destitute. A daughter was born to them, whom they also named Eupraxia. Antigonos soon died, and the mother withdrew from the imperial court. She went with her daughter to Egypt, on the pretext of inspecting her properties. Near the Thebaid there was a women's monastery with a strict monastic rule. The life of the inhabitants attracted the pious widow. She wanted to bestow aid on this monastery, but the abbess Theophila refused and said that the nuns had fully devoted themselves to God and that they did not wish the acquisition of any earthly riches. The abbess consented to accept only candles, incense and oil.

In a short while the mother died. Having learned of her death, the emperor St Theodosius sent St Eupraxia the Younger a letter in which he reminded her that her parents had betrothed her to the son of a certain senator, intending that she marry him when she reached age fifteen. The Emperor desired that she honor the commitment made by her parents. In reply, St Eupraxia wrote to the emperor that she had already become a bride of Christ, and she requested of the emperor to dispose of her properties, distributing the proceeds for the use of the Church and the needy.

St Eupraxia, when she reached the age of maturity, intensified her ascetic efforts all the more. At first she partook of food once a day, then after two days, three days, and finally, once a week. She combined her fasting with the fulfilling of all her monastic obediences. She toiled humbly in the kitchen, she washed dishes, she swept the premises and served the sisters with zeal and love. The sisters also loved the humble Eupraxia. But one of them envied her and explained away all her efforts as a desire for glory. This sister began to trouble and to reproach her, but the holy virgin did not answer her back, and instead humbly asked forgiveness.

The Enemy of the human race caused the saint much misfortune. Once,while getting water, she fell into the well, and the sisters pulled her out. Another time, St Eupraxia was chopping wood for the kitchen, and cut herself on the leg with an axe. When she carried an armload of wood up the ladder, she stepped on the hem of her garment. She fell, and a sharp splinter cut her near the eyes. All these woes St Eupraxia endured with patience, and when they asked her to rest, she would not consent.

For her efforts, the Lord granted St Eupraxia a gift of wonderworking. Through her prayers she healed a deaf and dumb crippled child, and she delivered a demon-possessed woman from infirmity. They began to bring the sick for healing to the monastery. The holy virgin humbled herself all the more, counting herself as least among the sisters. Before the death of St Eupraxia, the abbess had a vision. The holy virgin was transported into a splendid palace, and stood before the Throne of the Lord, surrounded by holy angels. The All-Pure Virgin showed St Eupraxia around the luminous chamber and said that She had made it ready for her, and that she would come into this habitation after ten days.

The abbess and the sisters wept bitterly, not wanting to lose St Eupraxia. The saint herself, in learning about the vision, wept because she was not prepared for death. , She asked the abbess to pray that the Lord would grant her one year more for repentance. The abbess consoled St Eupraxia and said that the Lord would grant her His great mercy. Suddenly St Eupraxia sensed herself not well, and having sickened, she soon peacefully died at the age of thirty. 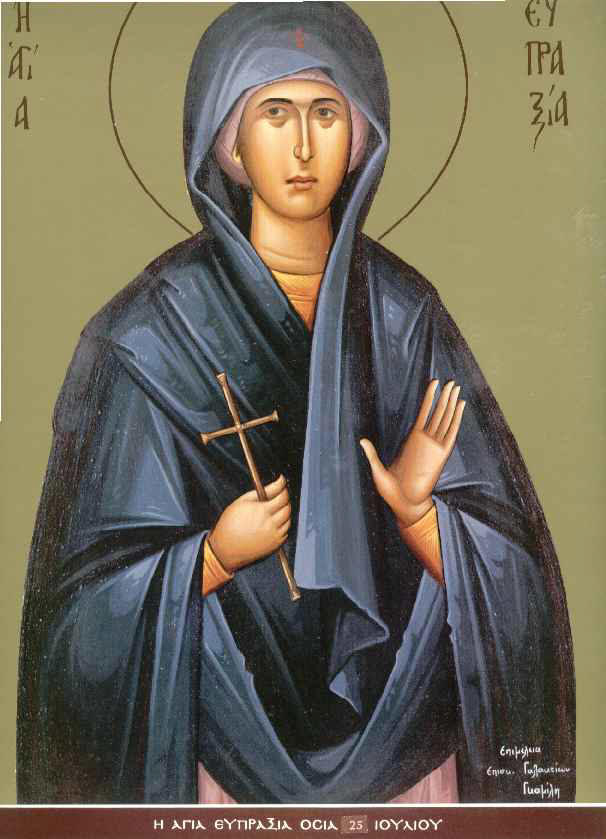